Then they gathered the kings together at the place that in Hebrew is called Armageddon. – Revelation 16:16

Apocalypse. Judgment Day. The End Times. Armageddon. Most students of the Bible know it as the place where the cataclysmic battle between forces of good and forces of evil will unfold. Some believe that this battle will take place soon. But few know that Armageddon is a real place—one that has seen more fighting and bloodshed than any other spot on the earth. 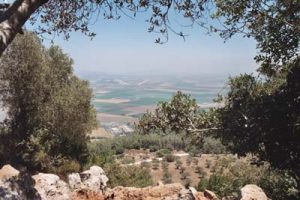 The name Armageddon is a corruption of the Hebrew phrase Har Megiddo, and it means “Mount of Megiddo.” More than thirty bloody conflicts have been fought at the ancient site of Megiddo and adjacent areas in the Jezreel Valley during the past 4000 years: Egyptians, Israelites, Greeks, Muslims, Crusaders, Mongols, British, Germans, Arabs, and Israelis have all fought and died here. The names of the warring leaders echo through history: Thutmose III, Deborah, Gideon, Saul & Jonathan, Ahab & Jezebel, Saladin, Napoleon, and Allenby, to name but the most famous (for more, cf. Eric Cline’s The Battles of Armageddon, Univ. of Michigan Press, 2000). Throughout history Megiddo and the Jezreel Valley have been ground zero for battles that determined the very course of civilization. No wonder that John, author of Revelation, envisions Armageddon to be the place of the final battle of good and evil on earth.

What makes this area so suited for battle? The Jezreel Valley is one of the few and largest pieces of flat land in Israel, prerequisite for ancient warfare with horses and chariots. The farm belt of Israel, this valley would be wet and muddy throughout the rainy season (late fall – early spring), thus unavailable for war. This is why the Bible talks of spring, following the rainy season, as the time kings go off to war (cf. 2 Samuel 11:1). From late spring to early fall, conditions were ideal.

The Jezreel Valley is guarded by mountains (hills, at least) nearly all the way around. Certain mountain passes were the only entry points. Whoever could take the high ground was usually assured victory. One of the most popular but treacherous routes was the Wadi ‘Ara, which passes under Megiddo. This location became the “mother of all battle fields” in Israel. Because of this, when John envisions a final battle between good and evil, Megiddo is the most logical place. This location is also prophesied in Zechariah 12:11 as the place where Yahweh will finally defeat his enemies.

Will an actual final battle take place here? Quite unlikely, given its small size. But symbolically, it is just the place!