For the bread of God is that which comes down out of heaven, and gives life to the world. (John 6:33) 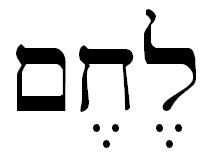 When Richard and Lucinda (our volunteer workers) first came to Israel, they noticed plastic sacks containing pieces of bread hanging from the sides of the trash containers along the street where we live. When they asked me about this, I couldn’t give an answer, but later remembered that people here do not throw away their leftover bread. I had heard that Jews consider it a sin to throw bread away, but never knew why.

I went to David’s library, pulled out the Encyclopaedia Judaica volume with the entry “Bread” and read that since biblical times, providing bread for the poor was regarded as a great religious duty (Isa. 58:7; Prov. 22:9); the withholding of it from the hungry, a sin (Job 22:7). The importance of sharing one’s bread with the poor has remained in the Jewish consciousness until today. Instead of dumping their bread along with the rest of their garbage into the garbage carts parked along the streets, they save the bread in plastic sacks and hang it from the metal projections on the sides of the carts. That way, the bread is potentially available to the poor. Not all Jews in Israel follow this custom, but lots do, especially here in our neighborhood of Maoz Zion.

It is not unusual to see hunks of bread or part of a roll lying on a curb, or on top of a wall. One day I noticed a young, poorly dressed man walking along the sidewalk. Suddenly, he turned around and proceeded to walk in the opposite direction. Without slowing his walk or turning his head, he raised his right arm and grabbed a piece of bread that had been lying on the ledge of the wall. This was the first time I had ever seen this happen and I realized that this poor man was truly hungry.

Bread has a special, almost sacred, connotation in Jewish life. Whenever bread is eaten, even a piece the size of an olive, a blessing must be said. Jesus referred to “bread” many times in his teachings, and he taught his disciples to pray, “Give us this day our daily bread.” “As bread cast upon the waters will return after many days” (Eccles. 11:1), so, “He that has a generous [lit., good] eye will be blessed; for he gives his bread to the poor” (Prov. 22:9). Let us think twice before we toss our leftover bread into the trash.