(Chapter excerpt from New Light on the Difficult Words of Jesus, with permission.)

The idea that Jesus taught pacifism arose primarily due to the misunderstanding of a number of his sayings. When viewed from a Jewish perspective, the gospel passages on which pacifism is based point to a quite different conclusion.

Many people over the years have seen Jesus as a pacifist—and for good reason. Here was a man who apparently was willing to die rather than defend himself, a man who taught his disciples not to kill, not to resist evil, to love their enemies, not to fear those who kill the body, and that only those who are willing to lose their lives will be able to save them.1 Jesus’ teachings seem very much like those of such popular pacifists as Tolstoy and Gandhi, and indeed, Tolstoy based his views on gospel passages.2

But did Jesus teach that it is wrong to defend oneself against attack? Did he really mean that we should not resist evil? Such a view seems to contradict what we read elsewhere in the Bible. In Romans 12:9, for example, Paul says that one should “hate what is evil,” and in James 4:7 we read that we are to “resist the devil.” It is clear from passages in Luke 22 that Jesus’ disciples were armed,3 and Jesus himself advised them to purchase swords.4

These apparent contradictions may be reconciled by recognizing the Hebraic nuances of the gospel texts, and by developing a deeper understanding of the Jewish background to Jesus’ words. 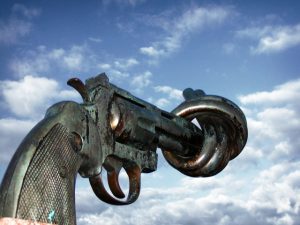 One verse that is commonly cited in support of Jesus’ pacifism is Matthew 5:21, which most English versions of the Bible render, “You shall not kill.” The Greek word translated “kill” in this passage is a form of the verb phoneuo. This verb was always used as the equivalent of the Hebrew verb ratsah in the Septuagint Greek translation of the Hebrew Scriptures. Ratsah is the word used in the sixth commandment in both Exodus 20:13 and its parallel, Deuteronomy 5:17. It seems quite certain that in Matthew 5:21 Jesus was quoting the sixth commandment.

The words phoneuo and ratsah are both ambiguous and can mean either “kill” or “murder,” depending upon the context. However, God himself commanded capital punishment for such crimes as deliberate murder (Ex 21:12–15), rape (Deut 22:25–26), kidnapping (Ex 21:16), adultery (Lev 20:10; Deut 22:22), sorcery (Ex 22:18), and many other crimes. The sixth commandment, therefore, must be a prohibition against murder, not killing as such.

In spite of this, the King James Version of 1611, and the revisions of 1885 (Revised Version) and 1952 (Revised Standard Version), used “kill” rather than “murder” in translating Jesus’ quotation of this commandment.5 Although most recent translations of the Bible have corrected this mistake,6 the use of “kill” in the King James Version and its successors has strongly influenced many English-speaking Christians’ views of self-defense.

Another saying of Jesus on which his supposed pacifism is based is found in Matthew 5:39a. It is usually translated, “Do not resist evil,” or “Do not resist one who is evil.” However, when Jesus’ saying is translated back into Hebrew, it is seen to be a quotation of a well-known Hebrew proverb that appears with slight variations in Psalms 37:1, 8 and Proverbs 24:19.7

This Hebrew maxim is usually translated, “Do not fret because of evildoers,” or “Do not be vexed by evildoers.” Bible translators apparently have supposed from the contexts of this maxim in Psalm 37 and Proverbs 24, which emphasize that evildoers will be destroyed, that the righteous should not be concerned about evildoers or pay them any attention.

This supposition is strengthened by the second half of Psalms 37:1 that, as it is usually translated, advises that one should not be envious of such evildoers. It thus appears that the verb translated “fret” or “be vexed” is correctly translated. However, elsewhere in the Bible this verb always seems to have some sense of the meaning “anger.”8 Furthermore, the two parallels to this verb in Psalms 37:8, both synonyms for anger, suggest that the verb in Matthew 5 must also have that meaning.

The verb in question is from the root h-r-h, whose basic meaning is “burn.” From this root meaning is derived “anger,” a sense that all Hebrew words from this root have in common. (Note that in English also, many verbs expressing anger have something to do with fire or burning—be hot, burn, boil, flare up.) In some occurrences of this root, anger is a result of jealousy or rivalry. Saul’s jealousy of David caused him to fly into a rage (1 Sam 20:7, 30). This nuance of h-r-h is also reflected in the use of “contend” in Isaiah 41:11: “Shamed and chagrined shall be all who contend with you” (JPS).

The particular form of the verb used in our proverb is a form for intensive action and thus expresses a passionate anger. This furious anger leads to a response in kind. Such anger results in a rivalry to see who can get the better of the other, and in each round of the competition the level of anger and violence rises. This amounts to responding to evil on its own terms, to competing in doing wrong with those who wrong us.

Do Not Try to Outdo Evildoers

The New English Bible’s translation of Psalms 37:1 and 37:8 is unique: “Do not strive to outdo the evildoers or emulate those who do wrong. For like grass they soon wither and fade like the green of spring”; “Be angry no more, have done with wrath; strive not to outdo in evildoing.” This seems to be the only version of the Bible that reflects the Hebrew “anger” verb’s nuance of rivalry or competition. 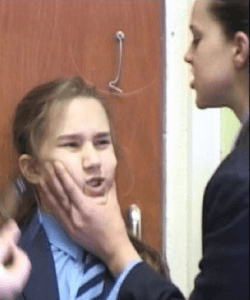 Likewise, the Good News Bible is apparently the only translation of the New Testament that uses “revenge,” or anything similar, to render Matthew 5:38–39:

You have heard that it was said, “An eye for an eye, and a tooth for a tooth.” But now I tell you: do not take revenge on someone who does you wrong. If anyone slaps you on the right cheek, let him slap your left cheek too.

It is surprising there are not other versions that translate in the same way. Following “But I tell you,” the context demands “Do not take revenge,” since the first part of verse 39 speaks of “an eye for an eye,” in other words, punishment that is a response in kind.

In idiomatic English, Matthew 5:39a might read simply, “Don’t try to get even with evildoers.”9 Not “competing” with evildoers is very different from not resisting evildoers. Jesus was not teaching that one should submit to evil, but that one should not seek revenge. Jesus’ statement has nothing to do with confronting a murderer or facing an enemy on the field of battle. As Proverbs 24:29 says, “Do not say, ‘I will do to him as he has done to me. I will pay the man back for what he has done.’”

English mistranslation of Matthew 5:39a has created a theological contradiction, but when Jesus’ saying is correctly understood, it harmonizes beautifully with other New Testament passages:

See that none of you pays back evil with evil; instead, always try to do good to each other and to all people. (1 Thess 5:15)

Do not repay evil with evil or curses with curses, but with blessings. Bless in return — that is what you have been called to do — so that you may inherit a blessing. (1 Pet 3:9)

Bless those who persecute you. Bless them, do not curse them. Do not pay anyone back with evil for evil…. If it is possible, as far as it depends on you, live peaceably with everyone. Beloved, do not take revenge, but leave that to the wrath of God. (Rom 12:14, 17–19)

Or, as Jesus commanded, “Love your enemies and pray for those who persecute you” (Mt 5:44). Our response to evil does have to be resistance — it is morally wrong to tolerate evil. However, we also must continue to show love for the evildoer.

It should be noted that loving and praying for one’s enemies in no way precludes defending oneself when one’s life is in danger. One is morally obligated to preserve life, including one’s own. Jesus never taught that it is wrong to defend oneself against life-threatening attack. However, he consistently taught his disciples to forgive and not to seek revenge against those who had insulted or wronged them. As Proverbs 20:22 counsels, “Do not say, ‘I will repay the evil deed in kind.’ Trust in the LORD. He will take care of it.” Our responsibility is not to respond in kind to offenses directed against us. That only prolongs and perpetuates the evil. We are not to “be overcome by evil,” but to “overcome evil with good” (Rom 12:21).

Not only does a pacifistic interpretation of Jesus’ sayings contradict many biblical passages, but pacifism was never a part of Jewish belief. According to Scripture, for example, a person who kills a housebreaker at night is not guilty of murder: “If a thief is seized while tunneling [to break into a house], and he is beaten to death, the person who killed him is not guilty of bloodshed” (Ex 22:2). The rationale is that the thief is ready to murder anyone who surprises him, thus one may preempt the thief.

The Jewish position on this issue is summed up in the rabbinic dictum, “If someone comes to murder you, anticipate him and kill him first.”10 The rabbis taught that if one is in danger of being murdered, he should defend himself, even if there is a measure of doubt about the intention of the attacker. Furthermore, if another person’s life is threatened, one is obligated to prevent that murder, if necessary by killing the attacker.11 The rabbis ruled that a person who is pursuing someone else with intent to murder may be killed.12 In light of this, it is very unlikely that Jesus, a Jew of the first century, would have espoused pacifism.

When we examine Jesus’ words from a Hebraic-Jewish perspective, we can see what has been obscured by mistranslation and lack of familiarity with Judaism. The passages construed to support pacifism actually condemn revenge rather than self-defense. It is not surprising that this interpretation is consistent with Jesus’ other teachings and the rest of biblical instruction.

11 This ruling was based on Leviticus 19:16: “You must not stand idly by when your neighbor’s life is at stake” (New English Translation).