One day, after Moses … saw an Egyptian beating a Hebrew, one of his own people. … he killed the Egyptian and hid him….The next day he went out and saw two Hebrews fighting. He asked the one in the wrong, “Why are you hitting your fellow Hebrew?” … When Pharaoh heard of this, he tried to kill Moses, but Moses fled from Pharaoh and went to live in Midian, where he sat down by a well. Now a priest of Midian had seven daughters, and they came to draw water and fill the troughs to water their father’s flock. Some shepherds came along and drove them away, but Moses got up and came to their rescue and watered their flock. Exodus 2:11-17

Modern novels often acquaint the reader with the main characters by giving an elaborate description of their personality and approach to life. In the Eastern culture of the Bible, this was often done through a different method, that of storytelling. Often the first story or stories about a person are deliberately chosen to describe the character’s personality to us. For instance, the first time we meet Saul, Israel’s first king who was foolish and disobedient, he had lost his donkeys and was wandering the countryside unable to find them – not a very flattering portrait (1 Sam 9:4). In contrast, early stories of King David are about his success against Goliath and his ability to kill a lion to defend his flocks.

In the first stories about Moses in Exodus, we can see many reasons why God chose Moses to lead his people. By growing up in the Egyptian court it appears that he was not discouraged by enslavement as the rest were, but yet he was loyal to his people and would even risk his life to defend them. He was so passionate in their defense that he would even murder – whether it was justified was not clear. He was also concerned with injustice between fellow Israelites, and attempted to arbitrate for the victim, showing his future leadership. Later, after he has left Egypt, he came to the defense of some foreign shepherd girls, and cares for their animals for them, showing his concern even for those outside his own people.

The theme that runs through these events is Moses’ loyalty to his people and compassion for the weak and passion to help them, no matter who they are. In other passages we learn about Moses extreme humility and feelings of unworthiness for being chosen for this task. We can see that God knew he would need someone with a servant’s heart, who would give his all to lead and care for his people, as Moses did.

They made their lives bitter with hard labor in brick and mortar and with all kinds of work in the fields; in all their hard labor the Egyptians used them ruthlessly. – Ex. 1:14

One of the central themes of the story of Exodus is that of avodah, which is translated work, labor, service, and slavery. In the passage above, the word is used four times in the Hebrew text. When God finally is moved to save his people, it is because of their avodah:

The Israelites groaned in their labors (avodah) and cried out, and their cry for help because of their labor (avodah) went up to God. Ex. 2:23 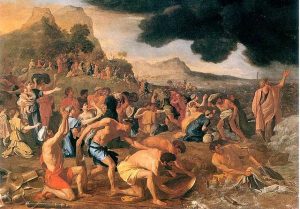 When God challenged Pharaoh, he challenged him on this very issue. He sends Moses to say, “Let my people go, that they may serve (avad) me in the wilderness” (Ex. 7:16). In this sentence the same word for labor and slavery is being used to describe worshipping God. The reason for this is that the same word, avad, can mean to serve or to worship.

God was challenging Pharaoh who had enslaved his people by saying that he must free them to serve him. Pharaoh was considered a god in ancient Egypt, so this was a direct challenge by the true God of Israel to the false “god” Pharaoh who demanded that they serve him instead.

God later commanded that his people worship no other gods, and this is also translated that they should “serve” no other gods. They were set free from them to serve and worship the true God alone.