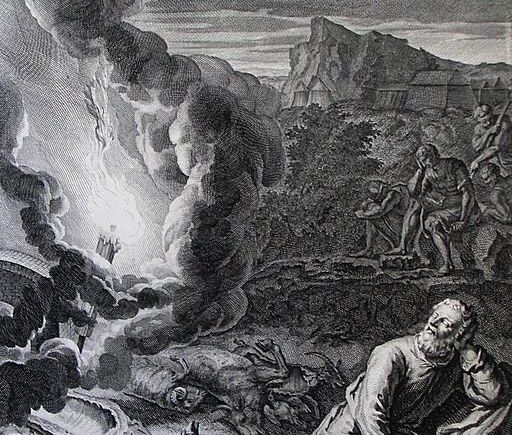 So the LORD said to him, “Bring me a heifer, a goat and a ram, each three years old, along with a dove and a young pigeon.” Abram brought all these to him, cut them in two and arranged the halves opposite each other; the birds, however, he did not cut in half… When the sun had set and darkness had fallen, a smoking firepot with a blazing torch appeared and passed between the pieces. On that day the LORD made a covenant with Abram. – Genesis 15:9-10,17-18 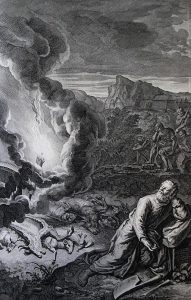 When God reveals Himself to humanity, He uses images and customs that are already known rather than asking people to do something they don’t understand. Here, when God made a covenant with Abram, He asked Abram to bring five animals, sacrifice them and make a path between the halves of their bodies. God was using a method of making (literally “cutting”) a covenant that was well known in the ancient near east. Typically both parties would walk through the path of blood to take the covenant upon themselves. Then part of the sacrifices would be cooked and eaten in a covenantal meal, to celebrate the new bond of friendship between them.

Ancient covenants were not just business arrangements, they were more like marriages, where the lives of both parties are bound together to each other. It is thought that part of the imagery of this ceremony was that they were merging their lives together by walking through the same blood, which represents life. It is also thought that the ceremony is a way of promising that if either party does not fulfill his end of the covenant, that his life would be forfeited, like that of the animals.

One thing that is unique about this story is the idea that a god would make a covenant with a person or nation. Many Israelite practices were like those of the neighboring tribes – their sacrifices, the style of their temples, their laws and other customs. But the idea of a god making a promise and binding Himself to a people was unthinkable, and no ancient stories record anything like this outside the Bible. In contrast, the “gods” of the myths of the time were always capricious, unpredictable and frequently unfair. The difference between the true God and other tribal deities is profound, because He is a God who makes a promise and keeps it for eternity.

It is also interesting that this ceremony is modified from its original form to say something else about God. Normally both parties pass through the peices, both committing themselves to the covenant. Here, only God passes through the pieces, as if He is making a unilateral promise to fulfill His covenant, no matter what Abram does. His constancy and faithfulness are unwavering, and thankfully not dependent on the fickleness of humankind.