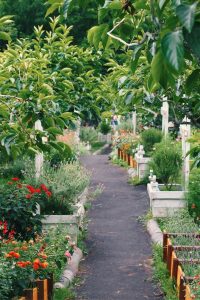 A fundamental aspect of God’s plan to redeem the world is mend is the idea that sin caused a break in the relationship between humankind and God, so God’s plan is to mend that break so that we can dwell together forever.

When God first makes man and woman, he puts them in a garden, and he walks and talks with them there. When they sin, they are cast out of the garden, and therefore barred from entering his presence. Mankind rapidly increases in wickedness until the whole world is filled with corruption.

However, God makes a covenant with the people of Israel that they will be his people, and he will be their God. After the covenant is first enacted, and before it was broken in any way, seventy elders of Israel could enter God’s presence and not suffer harm (Ex. 24:9-14).

This shows that God had, through this covenant, already begun to mend the severed relationship between mankind and himself, so that people could enter his presence once again, even if only temporarily. The break in intimacy was beginning to be healed, but it still was only partial: only a few could enter God’s presence, from one nation that he had chosen to extend his covenant.

When the Israelites left the presence of God on Mt. Sinai, he gave them instructions on how to make a portable facility where they could meet with God once again, the tabernacle. God said to Moses,

Notice what is significant in this sentence: God tells them to make a sanctuary for him, but his goal is not to dwell in it, but to dwell among them. His goal is to have intimacy with his people, for them to live in his presence. After it is built and consecrated, God’s Holy Spirit indwells it, and his people can worship him in the desert wherever they go.

When the Israelites sin by worshiping the golden calf, God threatens that his presence would not go with them into the Promised Land. He relents, however, after Moses pleads for them, and says they do not want to go if his presence does not go with them (Ex. 33). Later, Moses reminds them that they are unique among the nations in having their God so near them (Deut. 4:7). This was a central aspect of the blessing of Israel, that they could come near the true God.

Looking ahead to the New Testament, we see fulfillment of the messianic imagery of God’s presence coming near his people in a powerful new way. Certainly, when Jesus walked on earth as Emmanuel, God with us, God’s presence was at its peak in the person of Jesus. Yet he said there was coming something better: God’s presence as the Holy Spirit being poured out on humanity.

The final picture of God’s presence fully among his people is that of heaven in Revelation.

Then I saw a new heaven and a new earth; for the first heaven and the first earth passed away, and there is no longer any sea. And I saw the holy city, new Jerusalem, coming down out of heaven from God, made ready as a bride adorned for her husband. And I heard a loud voice from the throne, saying, “Behold, the tabernacle of God is among men, and He will dwell among them, and they shall be His people, and God Himself will be among them, and He will wipe away every tear from their eyes; and there will no longer be any death; there will no longer be any mourning, or crying, or pain; the first things have passed away.” (Rev. 21:1-4)

It is impossible to imagine the glory of God we will experience when we are present with him in heaven, but if there is any doubt that this is not the ultimate goal from the very beginning of scripture, we only need to compare the vision of heaven at end of the book of Revelation with the garden of Eden in the beginning of Genesis. 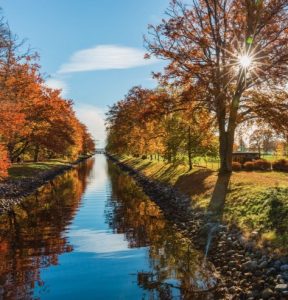 In Revelation, we read a description of heaven that includes a tree of life, a river of life, no sin, no death, and many other things that remind us of the the garden of Eden in Genesis. In Hebrew, the word for “heaven” is actually gan eden, the Garden of Eden! It is a picture of what all of the Bible is about, that the Lord made humans to dwell with him in intimate relationship.

When that relationship was severed by sin, God immediately made a plan to redeem humanity. Over history he worked out that plan so that the end is even more glorious than the beginning. At first only two people live in the presence of God, but at the end an entire kingdom of people live with God for all eternity!

“This, then, is how you should pray: `Our Father in heaven, hallowed be your name…” Matthew 6:9

Jesus begins to teach his disciples how to pray by addressing God as “Our Father.” He was not unique in this respect – other Jewish prayers of the day began with, “Our Father, Our King…” which is “Avinu, Malkenu….” This address encompasses both God’s love and his sovereignty, like Jesus’ prayer does, describing both God’s fatherly love, but also his holiness. The plural pronoun “our” is used out of respect for God, to not be too intimate.

The thing that is unique about Jesus is not how he told his disciples to address God, but how he addressed God himself, as “My Father.” No one else in all the Bible refers to God as “My Father.” There is an interesting reason for this. The Jews had a tradition about the Messiah that was related to the key Messianic promise that God gave to King David:

From this prophecy, they understood that when the Messiah came, he would have a relationship with God so close that when he prayed, he would refer to God as “My Father.”

This gives us a fascinating insight into an early story of Jesus’ life. When Jesus was twelve and his parents found him in the temple, Jesus said, “Did you not know that I had to be in My Father’s house?” (Luke 2:49) This was the first time that Jesus made a messianic reference to himself, showing that he understood who he was since childhood.

Throughout Jesus’ ministry, he refers to God as “my father,” and every time he used those words, his listeners would have heard it as a bold claim to be the One who God had promised would come. 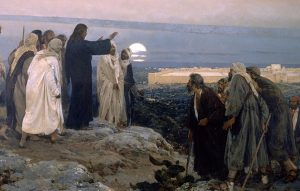