In the time of King Herod, after Jesus was born in Bethlehem of Judea, wise men from the East came to Jerusalem, asking, “Where is the child who has been born king of the Jews? For we observed his star at its rising, and have come to pay him homage.”
When King Herod heard this, he was frightened, and all Jerusalem with him; and calling together all the chief priests and scribes of the people, he inquired of them where the Messiah was to be born. – Matthew 2:1-4

King Herod, known as “Herod the Great” for his amazing military, political, financial, and architectural genius, ruled Judea from 40 BCE – 4 CE. The number and scope of projects that he was able to complete is almost unbelievable. It would appear that he had a dream team who imagined impossible projects and then found ways to accomplish them. And not just a few of these; he had palaces, temples, aqueducts, stadiums, and theaters going on all around the country — all at the same time!

One of these projects, the Herodium, 3 miles southeast of Bethlehem, is one of the most fascinating structures of all time. The upper palace/fortress was constructed as a double walled cylinder 214 feet in diameter reaching a height equivalent to a 7 storied building. This completed structure, built on top of an existing hill, towered more than 400 feet above the surrounding desert floor. For structural strength and defensive security, the base of the cylinder was covered by an artificial hill with steep embankments. The tremendous volume of earth required for this came from the top of the adjacent hill and Herod used thousands of workers to literally move a mountain from one place to another. 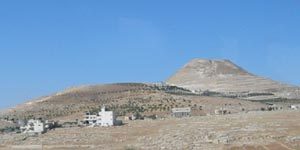 His own upper palace was replete with courtyards, hanging gardens, a huge cistern system, bath houses, and balconies. The lower palace, despite its lack of a local water source, had lush gardens surrounding an enormous swimming pool large enough for boats to carry Herod’s guests out to a private island in the center of the pool.

The whole complex was covered in gleaming white marble and would have competed visually with the prominence of the Holy Temple just 8 miles away. “From the Herodium, Herod could see Jerusalem and Bethlehem to the northwest, and the Judean Wilderness, Masada and the Dead Sea to the east. By the use of mirrors to reflect the sun, he could communicate messages from Jerusalem to the Herodium to Masada.” (2) 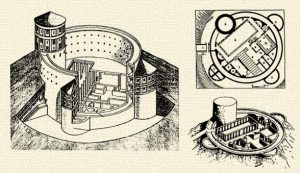 As clever as Herod was, he was perhaps known more for his wickedness. He maintained his authority by terrorizing his subjects. He grew increasingly paranoid and throughout his life he had thousands of people executed — including his wife, his son, and many family members. He killed everyone who might be a threat to his reign. This he tried to do as well to baby Jesus:

When Herod saw that he had been tricked by the wise men, he was infuriated, and he sent and killed all the children in and around Bethlehem who were two years old or under, according to the time that he had learned from the wise men. Then was fulfilled what had been spoken through the prophet Jeremiah:

“A voice was heard in Ramah, wailing and loud lamentation, Rachel weeping for her children; she refused to be consoled, because they are no more.” Matt. 2:16-18

From the shepherds of Bethlehem to the priests in Jerusalem, all would have been reminded of the presence of Herod every time they saw the volcano-like hill in the distance, or any time they encountered one of his many buildings. But what would they have been thinking? Would they have admired his ingenuity and achievements or would they have despised him and feared for their lives?

It would not be far fetched to imagine that Jesus was looking toward the Herodium when he said:

I tell you the truth, if you have faith as small as a mustard seed, you can say to this mountain, `Move from here to there’ and it will move. Nothing will be impossible for you. Matthew 17:20

In this inspiring statement, Jesus was pointing out that it doesn’t take the abuse of thousands of workers to do what man might think is impossible. If they couldn’t see the Herodium, his listeners would have known about Herod’s moving of the mountain. He had done the “impossible” through fear, cruelty, punishment, and death; but Jesus was saying, “If you will only follow the Father, if you have even the smallest grain of faith in me, nothing will be impossible.”

The lesson we should learn from all this is that the Lord is not impressed by what we might accomplish — he is only interested in our hearts. We can also be sure that Herod, and all those like him, will one day learn that the wise men had it right.

(1) Spellings can be found as “Herodium, Herodian, and Herodion.”
(2) www.ourfatherlutheran.net/biblehomelands/palestine/herodium.htm