Any student of language knows that each one frames the world in different ways. Often the same word is used for more than one thing that the culture considers equivalent, but distinguishes when differentiation seems important.

For instance, in Thai, the same word for cheese is used for butter, since they don’t eat much of either. In contrast, in Danish there are many different words to describe types of licorice, because it is a favorite in Denmark. Chiam Potok said that if you want to understand a culture, it is essential to understand the language, because that describes the very heart of the culture.

We as Westerners think of wisdom as to have cognitive ability, to be able to think great thoughts. We think of the wise philosopher as being the opposite of the manual laborer who pounds nails, or paints walls, or lays tile.

In Hebrew, however, the word hokmah is used to describe both. It speaks of people who are skilled laborers as those who have “wise hearts.” We read this term applied to the skilled laborers who built the tabernacle:

Every skilled woman (literally, with a wise heart) spun with her hands and brought what she had spun – blue, purple or scarlet yarn or fine linen. (Ex. 35:25)

And the Bible says that the craftsman who designed the high priest’s robes were given the “spirit of wisdom”:

Tell all the skilled men to whom I have given wisdom (literally, the spirit of wisdom) in such matters that they are to make garments for Aaron, for his consecration, so he may serve me as priest. (Ex. 28:3) 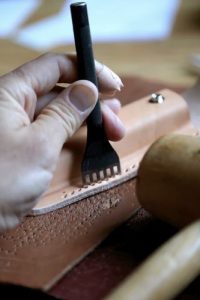 The word hokmah describes the ability to function successfully in life, whether it is by having the right approach to a difficult situation, or the ability to weave cloth. It is practical and applicable to this world, not just otherworldly.

Judaism has historically held manual labor in high regard, rather than disdaining it as unspiritual. When a great rabbi entered a room, people were to stop what they were doing and honor him. However, carpenters and other craftsman did not need to stop, because their work was considered just as honorable. This is part of the Hebraic affirmation of day-to-day life in this world. We can learn a lot of wisdom from the Hebrew word for wisdom!

As Westerners, we tend to believe God is only involved in giving us the ability to do what we call “spiritual,” like Bible study or prayer. We imagine that God’s input into our lives ends when we leave church on Sunday, and the rest is “secular.” Here, we learn that biblically, it is considered “wisdom” to do our jobs well: to be able to use a photocopier, or program a computer, or run a lawn mower. A janitor can be using his spiritual gifts as much as a pastor.

We can see from the word hokmah, as well as the rest of Proverbs, that all of our day-to-day lives are of concern to the Lord. God cares about whether we are a good 2nd grade teacher, or systems analyst, or check-out clerk. God is practical and down-to-earth. He cares about our credit card debt, whether our house is a mess, how much we watch TV. His desire is that we have wisdom in all things in order to live the life he gave us to the very best.

Let’s not make the mistake of believing that “eternal” life comes later. We are already in it: this is just the first part. The “wisdom” God has given us is meant to be used skillfully in this kingdom, prudently and for his glory.