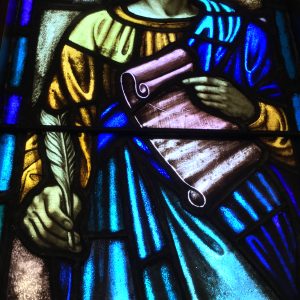 Both the book of Daniel and the book of Revelation are apocalyptic in nature, meaning they are filled with visions of end times. Christians spend a lot of time discussing the end times and have many viewpoints on how to read prophetic material.

One way to gain wisdom about prophecy is to look at it through the life and words of Jesus. How prophecy was fulfilled at his coming? What did he himself say about it?

Surprisingly, according to Jesus, God doesn’t necessarily fulfill prophecy as we think. Many of the prophecies that describe the coming of the Messiah also describe a time of judgment by God. For instance, in Luke 1:17, the angel tells Zechariah that his son John “will go on before the Lord, in the spirit and power of Elijah, to turn the hearts of the fathers to their children.”

The angel was quoting a prophecy from Malachi which says,

The Malachi passage appears to describe the “great and terrible day of the Lord” as coming right at the time of Elijah. John the Baptist knew scripture well, and in his ministry we hear him preaching that judgment is right around the corner, in accordance with his scriptures.

See, I will send my messenger, who will prepare the way before me. Then suddenly the Lord you are seeking will come to his temple; the messenger of the covenant, whom you desire, will come,” says the LORD Almighty. But who can endure the day of his coming? Who can stand when he appears? For he will be like a refiner’s fire or a launderer’s soap… So I will come near to you for judgment. I will be quick to testify against sorcerers, adulterers and perjurers, against those who defraud laborers of their wages, who oppress the widows and the fatherless, and deprive aliens of justice, but do not fear me,” says the LORD Almighty. (Mal 3:1-2, 4-5) 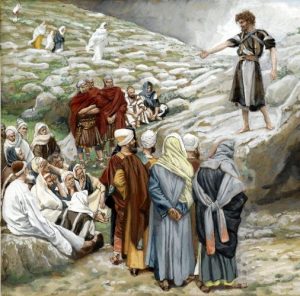 John’s question for Jesus came from the fact that Jesus wasn’t fulfilling prophecy as he expected. It appears he was thinking that Jesus would be a mighty warrior who would destroy the wicked, including those who had imprisoned him.

Jesus replies by quoting other prophecies about the Messiah, that “the blind receive sight, the lame walk, those who have leprosy are cured, the deaf hear, the dead are raised, and the good news is preached to the poor” (Luke 7:22-23). John probably still believed that Jesus was the Messiah, but he was asking the question to show how perplexed he was at how Jesus fulfilled prophecy.

Jesus specifically avoids passages about vengeance, demonstrating that his ministry is one of healing and forgiveness. In one place, Jesus selectively quotes a passage to avoid words about judgment. In Luke 4, he says,

The Spirit of the Lord is on me, because he has anointed me to preach good news to the poor. He has sent me to proclaim freedom for the prisoners and recovery of sight for the blind, to release the oppressed, to proclaim the year of the Lord’s favor. (Luke 4:18 -19)

He is quoting from Isaiah 61, but stops in mid-sentence, because after “to proclaim the year of the Lord’s favor,” it goes on to say, “and the day of vengeance of our God.” Jesus made a point of saying that he was the Messiah, and that his time on earth then was to bring forgiveness and a new relationship with God, but the judgment would come later. He was to suffer as in Isaiah 53, and only later come to judge and to reign.

Often, Christians say that Jesus’ people rejected him as Messiah because they just wanted a political leader, not a spiritual leader. It is more likely that many rejected him because he did not fit their reading of prophecy. They wanted vengeance and expected Jesus to come in judgment, as the Bible appeared to say.

Even Jesus’ disciples were waiting for him to announce when he would begin the war, and they would take their thrones to reign in power. They expected he would kill all his enemies, and then usher in a great messianic age where he would reign as Prince of Peace.

Instead, he fulfilled the prophecies about the “suffering one” in Isaiah 53, who by his own death would justify many and make atonement for their sins. He ushered in the Kingdom of God by his death, not by war. Only in his second coming will he come in judgment. 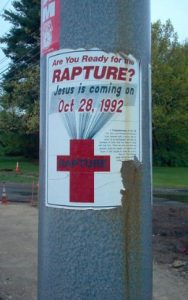 God surprised everyone, even the most faithful, in the coming of Jesus. It should humble us to realize that he does not use our logic to fulfill prophecy, and should make us very careful to say we have definitive knowledge about the future from Bible prophecy. Jesus said of his second coming, “of that day or hour no one knows, not even the angels in heaven, nor the Son, but the Father alone” (Mark 13:32).

One thing Jesus does say about his second coming that we often hear is the need to repent and to be prepared. He will return when he is least expected. As Peter says, God is not tarrying: he is waiting patiently for as many to come to faith to avoid judgment as possible. As we read Revelation and other prophecies about the end, it should give us a special urgency to share the gospel and live lives that are a witness to Christ.