In all that I’ve learned about Jesus through understanding his first century Jewish culture, one of the things that has enriched my study most is learning about Jesus’ habit of hinting to his scriptures. His words are peppered with quotes and allusions to the Old Testament.

Sometimes his references are obvious, and sometimes only a word or two. But because most of his audiences would have known scripture by memory, when he does allude to it, we can be pretty sure they would have caught it, and that the reference may have been important to his point.

Fifty years ago, many scholars assumed that the audiences in the Galilee to whom Jesus preached was religiously ignorant peasants, perhaps Gentile rather than Jewish. Newer research has revealed that first-century Galilean Jewish villages were very observant. Their residents ate strictly kosher food and often traveled to Jerusalem to observe the feasts. Several well-respected rabbis, whose discussions were on a very high level, came from the Galilee. These teachers traveled from village to village, and many townsfolk would come out to listen to them. As a result, people in that highly religious area were generally quite knowledgeable about scripture.

Jesus participated in these scholarly discussions brilliantly and often pulled together Scripture texts in beautiful ways to make a point. Often we miss this if we don’t have a strong knowledge of the Old Testament. He sometimes quoted just part of a verse and the rest of the passage he was hinting at would have an even stronger message. This was common practice in his day, and is still practiced by Jewish teachers up to the present.

Most intriguingly, some of the most powerful statements that Jesus made about his mission as Messiah came through the hints that he made to his Scriptures. For example, we read about a conversation between John the Baptist’s disciples and Jesus in Matt 11:

When John heard in prison what Christ was doing, he sent his disciples to ask him, “Are you the one who was to come, or should we expect someone else?” Jesus replied, “Go back and report to John what you hear and see: The blind receive sight, the lame walk, those who have leprosy are cured, the deaf hear, the dead are raised, and the good news is preached to the poor. Blessed is the man who does not fall away on account of me.” (Matt. 11: 2-6)

On the surface this text is fairly understandable, but underneath there is more going on. In John’s ministry he tells people to repent, because after him would come the one who would bring judgement. He emphasized the fulfillment of prophetic passages like Malachi 3 which say:

“See, I will send my messenger, who will prepare the way before me. Then suddenly the Lord you are seeking will come to his temple; the messenger of the covenant, whom you desire, will come,” says the LORD Almighty…Then I will draw near to you for judgment; and I will be a swift witness against the sorcerers and against the adulterers and against those who swear falsely, and against those who oppress the wage earner in his wages, the widow and the orphan, and those who turn aside the alien and do not fear Me,” says the LORD of hosts. (Mal. 3:1-2, 5)

From this passage, many focused on “one who will come,” which they understood as the Messiah who would destroy the wicked and those who oppressed Israel. Sitting in prison, John may have been discouraged and wanting to see Jesus begin to fulfill his role of judge.

Jesus answers John by pointing out the things that he is doing (the blind see, the lame walk, the deaf hear, the dead are raised, and the good news is preached to the poor) that fulfill other passages about the Messiah who is coming:

Be strong, do not fear; your God will come, he will come with vengeance; with divine retribution he will come to save you. Then will the eyes of the blind be opened and the ears of the deaf unstopped. Then will the lame leap like a deer, and the mute tongue shout for joy. (Isaiah 35: 4-6)

And in the very messianic passage about the anointed Messiah,

The Spirit of the Sovereign LORD is on me, because the LORD has anointed me to preach good news to the poor. He has sent me to bind up the brokenhearted, to proclaim freedom for the captives and release from darkness for the prisoners… (Isaiah 61:1)

By using these passages, he is explaining to John that he is doing exactly what was predicted in the scriptures about the “one who is to come,” and that his ministry is one of healing and forgiveness for those who will listen now, but that judgement would come later. Jesus could be quite sure John knew the reference, and his point would not have been lost on him.

I am the Good Shepherd 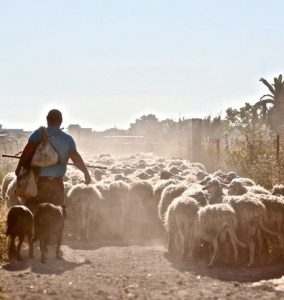 Another example of Jesus hinting from his scriptures is in John 10:11 when he says that he is the good shepherd:

We think of the good shepherd as a soft, warm image, and may think of Psalm 23. But Jesus was most likely also thinking of the description of the “good shepherd” in Ezekiel 34 which says:

‘For this is what the Sovereign LORD says: I myself will search for my sheep and look after them. As a shepherd looks after his scattered flock when he is with them, so will I look after my sheep. I will rescue them from all the places where they were scattered on a day of clouds and darkness. I myself will tend my sheep and have them lie down, declares the Sovereign LORD. I will search for the lost and bring back the strays. I will bind up the injured and strengthen the weak, but the sleek and the strong I will destroy. I will shepherd the flock with justice. (Ezekiel 34:11-12, 15-16 )

We can hear in this passage Jesus’ parable about the shepherd looking for his lost sheep, and seeking and saving the lost. We can also hear hints of his sayings about judging the flock and separating the sheep from the goats. Earlier in the passage there is also a very strong judgement against the “bad shepherds,” and it is reminiscent of Jesus’ strong condemnation of the corrupt religious leaders of his time:

This is what the Sovereign LORD says: Woe to the shepherds of Israel who only take care of themselves! Should not shepherds take care of the flock? You have not brought back the strays or searched for the lost. You have ruled them harshly and brutally. Therefore, O shepherds, hear the word of the LORD: I am against the shepherds and will hold them accountable for my flock. I will remove them from tending the flock so that the shepherds can no longer feed themselves. I will rescue my flock from their mouths, and it will no longer be food for them. (Ezekiel 34:2, 4, 9-10)

After Jesus gets done speaking, once more an uproar starts over what he claims. The people he was speaking to would have recognized his hints to the “good shepherd” of Ezekiel 34, and would have known its rich background and its strong implications. His description of himself as shepherd is much more powerful if you understand the scriptures behind it! They would have known that he was claiming to be the “one who is to come,” the “good shepherd,” the Messiah.

When I first discovered Jesus’ habit of “hinting,” I was surprised by his expectations of his audience, that they knew their Scriptures, our Old Testament. I was convicted too, because I didn’t grow up learning much about it. And relieved, because he was not quoting from some esoteric text lost to us today. The scripture that Jesus refers to are already in our hands, we just need to go study them. Many study Bibles today that have references in the margins for texts and quotations. I hope that as as you read through the Bible, you will find many new insights as you put Jesus’ words back in the context of the scriptures he was quoting.

A good place to find more articles on Jesus’ habit of “hinting” are the articles found on the Jerusalem Perspective website. “Remember Shiloh” by Joseph Frankovic is a good example of Jesus’ scripture quoting technique.