Now it will come about that in the last days, the mountain of the house of the LORD will be established as the chief of the mountains, and will be raised above the hills; and all the nations (or, Gentiles) will stream to it. Many peoples will come and say, ‘Come, let us go up to the mountain of the LORD, to the house of the God of Jacob; that He may teach us concerning His ways and that we may walk in His paths.’ For the law will go forth from Zion and the word of the LORD from Jerusalem. – Isaiah 2:2-3

The words above are from a prophecy of what would happen in the last days, in the Messianic age. Because the Messiah has come, we are in that age, and it is fascinating to see how these words are finally coming true right before our eyes.

Specifically, it says that the nations (goyim, also Gentiles) will come to the land God has given his people, in order to study, to learn more about the Lord and how to follow him. In the past 50 years since the nation of Israel has been established, an enormous wealth of information has been uncovered to enrich our study of the Bible. Most of us are hardly aware of how important that has been for Christianity.

This welcoming sign greets everyone arriving at Ben Gurion Airport in Tel Aviv.

The Dead Sea Scrolls, which were discovered the year Israel was established, have been some of the most important finds. They have shown the reliability and antiquity of the Scriptures, because they are over 1000 years older than other manuscripts. They date from Jesus’ time and give us much insight into the Essenes, an important part of the culture that Jesus was addressing. Every new discovery in archaeology gives another piece of the puzzle, making the text a little clearer. Some of the most important finds in Israel have been made in just the past 10 years! We can be optimistic about what is just around the corner.

Few may also know of a remarkable wave of scholarship that is developing as Christians and Jews are studying Jesus together in Israel. In former times, Christians have tended to miss the importance of Jesus’ Jewish context for understanding his message. But as they have traveled to Israel to study the land and manuscripts, the Jews there have worked together with them to yield great insights on Jesus’ life in its context. A pioneering group of scholars called the Jerusalem School of Synoptic Research is part of this development, and has had fascinating insights on Jesus’ words in the light of his Jewish culture (1).

While Christians may not know of some of the amazing things that are going on in the land of Israel, they are starting to discover how powerful it is to personally experience the Promised Land. Many find that the text takes on brilliant color and new depth once they’ve walked the land.

It has taken thousands of years for a window to open, to enable the Gentiles to come from the ends of the earth to the mountain of the Lord. And only now have we had the tools to uncover evidence that God preserved below the surface of the land. How amazing of God, that he allows even us to be a part of the Scriptures, because we now are the fulfillment of his words in Isaiah 2 long ago. 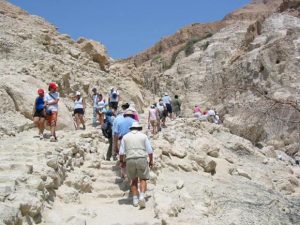