As evening approached, there came a rich man from Arimathea, named Joseph, who had himself become a disciple of Jesus. Going to Pilate, he asked for Jesus’ body, and Pilate ordered that it be given to him. Joseph took the body, wrapped it in a clean linen cloth, and placed it in his own new tomb that had been cut out of the rock. He rolled a big stone in front of the entrance to the tomb and went away.
– Matthew 27:57-60

One of the great debates among biblical scholars and archaeologists is the site where Jesus was buried in or outside Jerusalem. We know a few facts from the Bible about this: 1) crucifixions and burials happened outside the city walls; 2) Jesus was buried in a new tomb of Joseph of Arimathea; 3) and it was cut out of rock, with a big stone rolled in front of it. 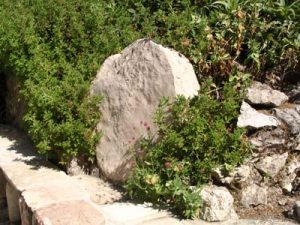 When you visit Jerusalem, you’re directed to two competing sites for the crucifixion and burial of Jesus. The oldest site, the Church of the Holy Sepulcher, is near the center of the present-day Old City. Destroyed and rebuilt a number of times, parts of the church date back to 135 AD, although the site itself is known to be the center of liturgical celebrations for 35 years after Jesus’ death. It is the traditional site of and divided among six groups: Catholic, Armenian, Coptic, Greek Orthodox, Syrian, and Ethiopian churches.

In 1883, Charles Gordon, dissatisfied with all the trappings surrounding this tomb, and concerned 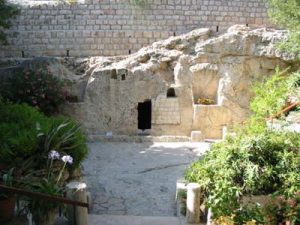 that it resided within the walls of Jerusalem, found another site just north and outside the city walls: the Garden Tomb and its nearby Golgotha (a skull-like rock).

Which is it? While the Garden tomb is a much more pleasant site, the actual tomb would not have been “new” for Jesus; its style is actually several centuries older (possibly 700-900 BC). Gordon’s concern about the city walls is nullified by the fact that Jerusalem expanded in 41-43 AD, with the walls now encompassing the site of the Holy Sepulcher.

In addition, the Church is 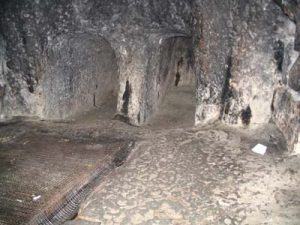 built over an old quarry (usual crucifixion site; you can see the chisel marks) and has a an interesting tomb in its basement (below the ornate one of Jesus) which is called the tomb of Joseph of Arimathea. The style of this tomb matches that of other first century tombs in the area. Is this Jesus’ tomb? Who knows, but at least it fits the biblical & historical facts better. But ultimately, the most important fact is that the tomb is empty and our Lord is living!