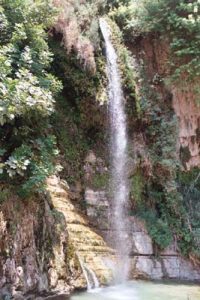 My people have committed two sins: They have forsaken me, the spring of living water, and have dug their own cisterns, broken cisterns that cannot hold water. – Jeremiah 2:13

“Drink lots of water,” we were told. “Sip it constantly, 3 – 5 liters a day.” It didn’t take long to discover why. Israel is a desert culture; nothing is more precious than water. Maybe that’s why Bible authors often use water imagery — even for God!

Early on our trip, we sat by one of the sources of the Jordan River at Dan. Here there are 17 spots where the water comes out from Mount Hermon in springs, joining together to form a rapidly flowing river. The Jordan flows south into the Sea of Galilee, then it continues south until it empties into the Dead Sea.

In Jeremiah’s prophecy, God uses the spring as an image for himself. And for good reason. A spring produces water year-round, while all other water supplies are temporary or seasonal. Throughout the desert one can see hundreds of wadis, large and small, which flow with water 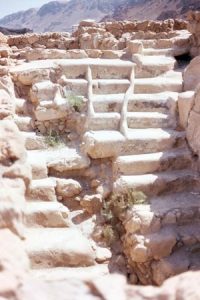 during the rainy season, but are dry riverbeds the rest of the year. To keep a steady water supply when not near a spring, people constructed cisterns from rock, plastering the insides. But these held tepid, often polluted water, when they were in good repair. …

Cisterns were useless, of course, when cracked from heat or usage. Springs, on the other hand, produced “living water” — water directly from the hand of God. Regardless of the season or location, the spring brought life in a “dry and weary land.”

Similarly, God is “living water” for our lives, much more like the spring at Dan, the headwaters of the Jordan, than the end of the Jordan, the Dead Sea. The water at Dan was fresh, cool and clean; we even drank from them. But drinking any quantity of the Dead Sea waters would cause rapid illness and even death.

God is also a constant spring, not a seasonal wadi. Yet his people have not only left him, the living water, but they’ve also forsaken him to build their own cisterns. Spiritually they’ve carved out a reservoir which they can control. Sometimes we develop a “cistern relationship” with God. We try to get along without Him, do it our own way, until we get dry and need refilling. Even a short time in the land will convince you how ludicrous it is to forsake “living water” — life itself! 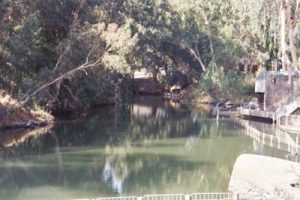 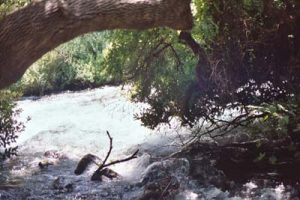 “Israel was sandwiched between the superpowers to the north and south, and very often they were lunch.” That cleverly phrased statement by Wink Thompson, one of our teacher-guides on my trip to Israel, sums up a crucial truth about the land and history of Israel. The land in which God placed his people was, and still is, a land between. 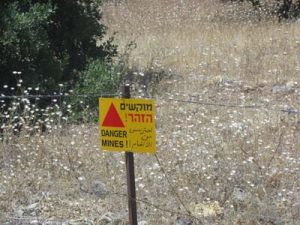 Israel is a land between the Mediterranean Sea to the west, the Arabian Desert to the east. Both proved difficult for travel. Early ships were not made to survive the raging sea, especially in the fall and winter months. And people were not made to bear the intense heat and dryness of the
forbidding desert. Israel, then, served as a narrow land bridge between these areas.

But a land bridge for whom? Early cultures settled where they could survive, and survival in this region means water. Most of the dominant nations grew up around rivers. North of Israel we find the Mesopotamian (Greek: “between the rivers”) region of the Tigris and Euphrates rivers. Here Assyria, Babylon and Persia became powers in the north. To th south, the Nile River became the source of life for Egyptians. These two regions form the northern and southern arms of the Fertile Crescent. And the land between? Israel, of course.

North and south needed each other’s resources and products to survive. So Israel became the land bridge for trade between the main nations of the world. The major trade route, the via maris, cut right through its heart. Entering the land to the north near Hazor, the via maris wound through Capernaum in Galilee, through the E-W Valley of Jezreel via Megiddo, then down the coastline on its way to Egypt.

Kings soon realized that if you control world trade, you could rule the world. And to do that, you had to rule Israel. For most of its history, Israel has been a land under occupation. Whether Egypt, Assyria, Babylon, Persia, Greece, or Rome, in the biblical period, or Muslim Arabs, Turks, Crusaders, Ottomans, or Brits since that time, the land and people of Israel have had few respites from foreign control.

Today, for one of the few times in history, Israel is actually an independent nation, winning their independence in 1948. Yet, Israel remains a land between. In the northern Golan region, we traveled right near the Syrian border (watch out for the mined fields from 1967 war!). At Dan we could look into Lebanon. From Masada the hills of Jordan were very clear across the Jordan River. To the south, Egypt looms large. If you extend the circle wider, large and hostile Arab countries are in range (as Iraqi Scud missiles proved in 1991).

But even within their land, Israel finds itself between a growing number of Palestinian Arabs who believe the land is theirs. We passed through the West Bank and its military checkpoints several times. The wall being built around it stands like a giant scar in the land, yet it has cut suicide bombings down