When He approached Jerusalem, He saw the city and wept over it, saying, ‘If you had known in this day, even you, the things which make for peace! But now they have been hidden from your eyes. For the days will come upon you when your enemies will throw up a barricade against you, and surround you and hem you in on every side, and they will level you to the ground and your children within you, and they will not leave in you one stone upon another, because you did not recognize the time of your visitation.’ – Luke 19:41-44

When we were near the Temple in Jerusalem, we saw a powerful sight – a great mound of huge blocks in a heap on the Herodian street adjacent to the Temple. This pile of stones is a “two-thousand-year-old scream frozen in stone.”1

The blocks were stones of the Temple that were heaved 50 feet over the Western support wall onto the street below, during the destruction of the Temple by the Romans on August 10, 70 AD. Roman soldiers set the fire to the Temple, and in order to recover the gold that melted between the stones, they pried every block apart and literally left not one stone on another. A person can still see how the pavement caved in from the impact of the stones that were dropped from above. It’s a breathtaking scene. 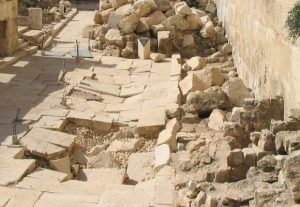 Be pleased, O Lord our God, with your people Israel and with their prayers.
Restore the service to the inner sanctuary of your Temple, and receive in love and with favor both the fire-offerings of Israel and their prayers.
May the worship of your people Israel always be acceptable to you.
And let our eyes behold your return in mercy to Zion.
Blessed are you, O Lord, who restores his divine presence to Zion.2

It is fascinating that Jesus shares with the Jewish people this great mourning for Jerusalem and the Temple, as he prophesies their destruction in today’s passage in Luke 19. Like Jeremiah, Jesus was sent by God to warn the people of the impending doom of the Temple if the corruption of the priesthood didn’t end. (In Jesus’ day, the Sadducean leaders were widely known to be a “mafia”-like organization, and were largely responsible for his death.).3 When Jesus says in Luke 19:46 that “you have made it a robber’s den,” he was alluding to Jeremiah’s words in Jeremiah 7 about God threatening to destroy the Temple for its corruption.

It is amazing to see the fulfillment of Jesus’ words frozen in stone yet today.

(1) This was uncovered and visible to the public for the first time in 1997. It was described in a Jerusalem Post article by Abraham Rabinovich, a copy is available at this link.

(2) From the Amidah – available on this link.
(3) See Jesus and the Sadducean Syndicate, by Robert Mason, at this link.