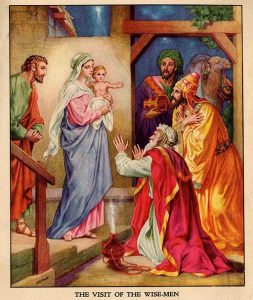 One of the stories of Christmas that seems to be most cryptic is that of the wise men. Who were they? Where did they come from? Why did they give Jesus the gifts they did? Why are they called magi and what does the word magi mean? Why do we sometimes call them kings? What is the significance of this story, and what does it say about Jesus?

Let’s take a look at the text:

The first question that we should ask is, why are they expecting a king, and why is Herod concerned? The answer comes from looking back at some promises from the scriptures. In Micah 4, the prophet told of a messianic age when God would set everything right. Micah said that a king would arise from Bethlehem, the city where David had been born several hundred years before:

“But as for you, Bethlehem Ephrathah,
Too little to be among the clans of Judah,
From you One will go forth for
Me to be ruler in Israel.
His goings forth are from long ago,
From the days of eternity.” …
He will arise and shepherd His flock
In the strength of the LORD,
In the majesty of the name of the LORD His God. (Micah 5:2, 4) 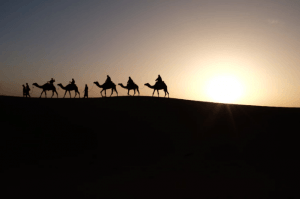 This king that would come would be a descendent of David. This comes from a very important promise that God had made to King David, who had displayed great faith and love for God:

“‘I declare to you that the LORD will build a house for you: When your days are over and you go to be with your fathers, I will raise up your offspring to succeed you, one of your own sons, and I will establish his kingdom. He is the one who will build a house for me, and I will establish his throne forever. I will be his father, and he will be my son. I will never take my love away from him, as I took it away from your predecessor. I will set him over my house and my kingdom forever; his throne will be established forever.’” (1 Chron. 17:10b-14)

This is the one who Herod feared, this great king that God himself would bring into power.

Prophecies about this king

When a powerful king arises in a country, other kings would give him gifts to form alliances and show friendliness toward that nation. David and Solomon, Israel’s most powerful kings, formed many alliances with the nations around them. One story from Solomon’s life is even reminiscent of the story of the wise men:

When the queen of Sheba heard about the fame of Solomon and his relation to the name of the LORD, she came to test him with hard questions. Arriving at Jerusalem with a very great caravan — with camels carrying spices, large quantities of gold, and precious stones — she came to Solomon and talked with him about all that she had on her mind. … And she gave the king 120 talents of gold, large quantities of spices, and precious stones. Never again were so many spices brought in as those the queen of Sheba gave to King Solomon. (1 Kings 10:1-2, 10)

Interestingly, other prophecies describe this same thing occurring when the messianic age would come. In Isaiah 60 it says:

“Arise, shine, for your light has come, and the glory of the LORD rises upon you. See, darkness covers the earth and thick darkness is over the peoples, but the LORD rises upon you and his glory appears over you. Nations will come to your light, and kings to the brightness of your dawn. … The wealth on the seas will be brought to you, to you the riches of the nations will come. Herds of camels will cover your land, young camels of Midian and Ephah. And all from Sheba will come, bearing gold and frankincense and proclaiming the praise of the LORD. (Is 60:1-4, 6)

Psalm 72 prophesies a similar thing about the messianic king:

He will defend the afflicted among the people and save the children of the needy; he will crush the oppressor. He will endure as long as the sun, as long as the moon, through all generations. … He will rule from sea to sea and from the River to the ends of the earth. The desert tribes will bow before him and his enemies will lick the dust. The kings of Tarshish and of distant shores will bring tribute to him; the kings of Sheba and Seba will present him gifts. All kings will bow down to him and all nations will serve him. For he will deliver the needy who cry out, the afflicted who have no one to help. He will take pity on the weak and the needy and save the needy from death. He will rescue them from oppression and violence, for precious is their blood in his sight. Long may he live! May gold from Sheba be given him. (Ps. 72: 4-5, 8-15)

In all three of these stories, royalty from Sheba would come bearing gifts, including gold, precious stones, and spices including frankincense. Where is Sheba? It is at the southern end of the Arabian peninsula, where Yemen is today. It was known in ancient times as possessing great wealth — gold, jewels and spices.

Spices don’t seem very precious to us, but in ancient times, some spices and aromatic oils were worth more than their weight in diamonds because of their rarity and use as perfumes, incense and medicine. Herod gained much of his fantastic wealth by trading in spices and regulating the trading routes.

To transport them over 1,800 miles through the dangerously dry, barren Arabian desert, camels were the only animals that could be used. From these Old Testament prophecies we can get some reason of why the tradition was that royalty would come from the east, and that they would be on camels.

Who are the magi? 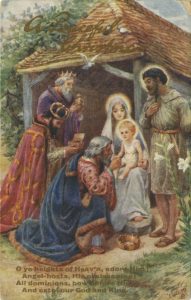 In different text translations the travelers are called wise men, magi or astrologers. The term “wise men,” hakamim, is often used in the Old Testament to describe a pagan king’s counselors that are schooled in the magical arts, and are often mentioned with magicians and diviners.

Pagan kings like the Pharaoh in Egypt had magicians who interpreted dreams and imitated Moses’ miracles. Nebuchadnezzar, the Babylonian king, had wise men and magicians as well. These “spiritual advisors” were respected counselors and probably also acted as ambassadors. When they learned by some kind of divination that a great king had arisen in Israel, most likely the pagan kings had sent them with riches to deliver to this powerful new ruler, to pay homage for their countries.

We are unsure of what type of celestial event the star was or how the wise men interpreted it, but through some spiritual means they learned that a great king had been born in Israel. This says something about the impact the coming of Christ had on the spiritual world. We hear about angels rejoicing, but the news of Jesus’ coming shook the rest of the unseen world as well!

In the scriptures we see other places where God reveals his plans to foreign diviners. In a strange parallel to this story, Balaam, another pagan magician, prophesied about the rise of a king in Israel, and even associates him with a star:

Perhaps the reason Herod feared Jesus is he knew this prophecy said that he, an Edomite, would fall to the true king of the Jews.

What are the Frankincense and Myrrh for?

Both frankincense and myrrh are purified from aromatic tree saps into either powders or oils. They would have been gifts more precious than the gold, because of their rarity and the tremendous expense in transporting them: but why were they appropriate for Jesus, this newborn king they had come to worship?

Remember that in biblical times, a king was not “crowned” in a coronation ceremony, he was anointed with oil. This was olive oil blended with myrrh and some other of the most expensive fragrances known, and would be like liquid diamonds in terms of expense.The anointed king would have an aroma that would say that he was the one chosen by God. Kings would wear fragrances other times after they were anointed to show their kingliness. Psalm 45, about King David, says:

Therefore God, your God, has anointed you
With the oil of joy above your fellows.
All Your garments are fragrant
with myrrh and aloes and cassia;
Kings’ daughters are among your noble ladies;
At your right hand stands the queen in gold from Ophir. (Ps 45:7-9)

And about King Solomon it says:

What is this coming up from the wilderness
Like columns of smoke,
Perfumed with myrrh and frankincense,
With all scented powders of the merchant?
Behold, it is the carriage of Solomon. (Songs 3:6)

So, perhaps the wise men had brought these precious oils to anoint the king, the prophesied son of David. What is most interesting is that the Hebrew word for anointed is Moshiach, “Messiah.” In Greek, the same word is Christ. So every time we say Jesus Christ, we are calling Jesus the “Anointed King.” So the wise men were proclaiming Jesus as the “anointed one,” the Messiah, the Christ, the King of Kings!