So when the Midianite merchants came by, his brothers pulled Joseph up out of the cistern and sold him for twenty shekels of silver to the Ishmaelites, who took him to Egypt. – Genesis 37:28

At the opening of the book of Exodus, we learn that four hundred years after the family of Jacob went down to Egypt to live, they have been enslaved. It is ironic that the brothers never would have moved their families to Egypt if they had not sold their brother Joseph into slavery there. In a strange way, when they sold one member into slavery, they were selling their own family into future slavery. Their fate is linked to their sin, somehow. 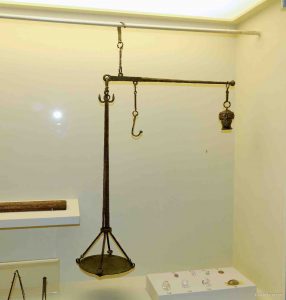 The rabbis pointed out that this pattern of the punishment fitting the crime is a recurring theme throughout the Scriptures. Because Jacob deceived Isaac in his blindness into giving him the birthright, Jacob is fooled into marrying Leah when he is “blind” – when she is brought to him veiled, and in the night he doesn’t see his new wife. Or, because Pharaoh killed the Israelite boys by drowning them in the river, God defeated his army by drowning them too. Haman was hanged on the gallows that he prepared for Mordechai. The rabbis called this pattern “measure for measure” – midah keneged midah.

While this is the pattern for divine justice, God tells the people of Israel that they should use midah keneged midah in a different way. They are to show mercy on the aliens and foreigners, because they were once foreigners too, in the land of Egypt. Instead of remembering their suffering there in order to be cruel or vengeful, they should remember how it felt to be in a strange land and to be oppressed, and to have compassion on others because of it.

Jesus tells us the same thing — that when we remember how much we’ve been forgiven, it should make us desire to forgive others too. He says that with the measure that we use, it will be measured to us as well.

For more details on this concept, see the longer article, “The Logic of Measure for Measure.”