I heard, once, of a woman who was deeply offended at the story of the near sacrifice of Isaac, and generally horrified by the kind of God that would put a child through such terrible anguish. She said she hated the story because it showed her that God was guilty of child abuse. 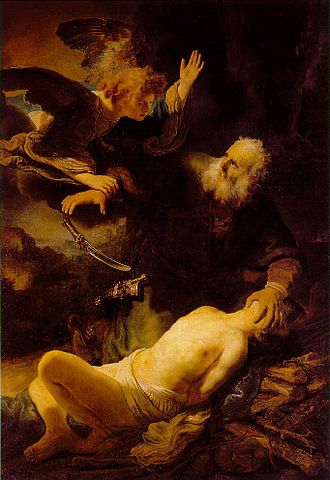 A response to that is to look more carefully at Isaac’s role in the story. Is he a little boy, terrorized by the incident? The answer lies in a seemingly minor detail in the text, which says that Isaac carried the load of wood. God had asked for an olah, a whole burnt offering – and that requires a lot of wood! No toddler could have carried such an enormous burden. The reason he carried it was more likely because he was a strong young man, much more capable than his elderly father (100+ years old!) at hauling a heavy load of wood up a mountain.

If Isaac is a strong young man, his Abraham couldn’t have forced Isaac to do anything against his will. Isaac would have had to have been a willing sacrifice, complying with his fathers wishes, with trust in both his father and God. That means that Isaac was as much a man of heroic faith as his father, if not more.

The woman’s response to this story contains a revulsion at the death of Jesus as well, when another innocent young man was asked to sacrifice Himself. Often people think of His Father as a wrathful, angry God who was cruel in asking for this sacrifice too. What we often fail to realize is that there are not two Gods involved – just one. And, the One who willingly gave Himself as a sacrifice was as much God as His Father.

If this is true, God’s ultimate role in the story is not just to watch from heaven above, but to carry the wood that Isaac had carried, and become the ultimate substitution for Isaac Himself.