Then the king of Egypt summoned the midwives and asked them, “Why have you done this? Why have you let the boys live?” The midwives answered Pharaoh, “Hebrew women are not like Egyptian women; they are vigorous and give birth before the midwives arrive.” Exodus 1:18-19 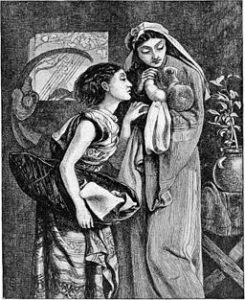 In the first few chapters of Exodus, women play a major role. Pharaoh tells the midwives Shiprah and Puah to kill the newborn boys but let the girls live. His assumption was that while men posed a threat, women would be easily assimilated into Egyptian culture and exploited as domestic and sexual slaves. We also see hints of this in Abraham’s time, when he tells Sarah that the Egyptians would kill him and take her. (Genesis 12:12)

Instead, the first stories of Exodus humorously tell us that exactly the opposite occurred — that the women defeated Pharaoh! After the midwives saved the baby boys, Pharaoh confronted them. They responded with a sly insult for an excuse, that Hebrew women were stronger than Egyptian women and simply gave birth on their own, before they could get there!

Moses’ mother and sister were also heroines, saving his life by floating him out into the Nile where Pharaoh’s daughter would hear his cries and ache for his plight. Not only did women save Moses’ life, but Pharaoh’s own family defeated him, and Moses’ mother even got paid to nurse him!

An ancient listener would have laughed at how God had used the weak to defeat the strong, and realized that already, God was the one coming to rescue his people.

Photo: Bible Pictures and What They Teach Us by Charles Foster