“This is eternal life, that they may know You, the only true God, and Jesus Christ whom You have sent.” John 17:3

One of the most moving experiences of my devotional life centered around this prayer of Jesus. We were involved in a small group Bible study working through the book of John. On the particular week that we were to study John 17, the leader asked if we could do something a bit out of the ordinary to begin our lesson, and to this day, if you asked anyone who was there, I’m sure they will remember it.

The leader said, “I would like to play the role of Jesus, and I would like you to imagine that you are His friends who are there with Him in the final hours before He went to the cross. At the same time you are listening as if you were there, also think about how Jesus was looking far into the future and including all of us in His conversation with His Father.” Then the leader turned down the lights and prayed Jesus’ prayer for us.

I am asking you now to hear this prayer in that same spirit as you read it through. Be listening to how much Jesus loves you, and how He selflessly pleads for you before His Father. Then please carry these wonderful thoughts throughout the rest of your life, sharing them with others who need to know along the way.

He will give the rain for your land in its season, that you may gather in your grain and your new wine and your oil, and you will eat and be satisfied. Deuteronomy 11:14-15, edited. 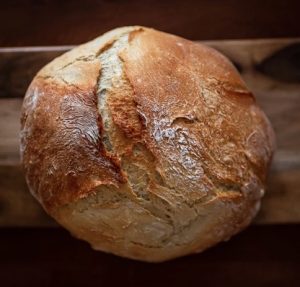 The line from the Lord’s Prayer, “Give us this day our daily bread” is a line that most Americans can hardly relate to. We may guess that “bread” was representational of food in general, so the text is talking about the provision we need for life each day. But we are so amply supplied that we can’t imagine praying that prayer.

Rev. Stephen Kaziimba, who came to our area from Uganda has been teaching us otherwise about how much of the world hears these words. After he had been in Michigan for a year, he was asked what he would remember longest from being here. His reply was, “All my life, I will never forget having this one year when I did not need to worry about food.”

I was dumbfounded by that statement, that a good friend could come from a place where such basic necessities were unmet. He pointed out that in America we have food but no appetite, but where he comes from, people have appetite but no food. In his country, “Give us our daily bread” is a heartfelt prayer, expressing the continual worry of most people.

Now, when I read the Scriptures, I see that his perspective is more close to that of the Bible than mine is. One of God’s promises that the Israelites would have heard as a great blessing was that they “will eat and be satisfied.” To have enough to be full was a blessing from the Lord, and to be fat was a sign of beauty and bounty. As one who is a little overweight, it shows me both that God has abundantly blessed me, and that I’m not doing enough to share the blessings with others in need.

Sometimes the best way to pray a prayer is to live the prayer. Now, whenever I hear the words “Give us our daily bread” it will remind me to to not overbuy food when I go shopping, to not order huge portions in restaurants, and to eat my leftovers before they go bad. And most of all, it will remind me to be thankful for the abundant food we have and to be mindful of the needs of others.

Photo by Stephen Walker on Unsplash