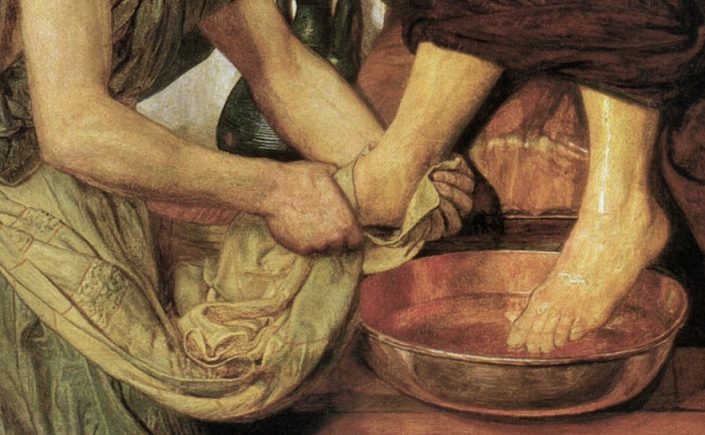 [Jesus] got up from the meal, took off his outer clothing, and wrapped a towel around his waist. After that, he poured water into a basin and began to wash his disciples’ feet… [Afterwards, he said,] “Now that I, your Lord and Teacher, have washed your feet, you also should wash one another’s feet. – John 13:4-5,14

Humility and serving others was of great concern to Jesus. In the above passage, Jesus embodies these themes in his washing of the disciple’s feet. He speaks with disgust about teachers who “love the place of honor at banquets and the most important seats in the synagogues” (Matt. 23:6) and adds, “The greatest among you will be your servant. For whoever exalts himself will be humbled, and whoever humbles himself will be exalted.” (vs. 11-12).

Honor was vital in the first-century Jewish world, and many customs differentiated those with lesser status from those with more. Specifically, students were expected to honor their teachers, and disciples their rabbis. Disciples were to act as servants to their rabbi, serving his food and pouring water over his hands for him to wash. Their model was Elisha who humbly served as Elijah’s mesharet, meaning “assistant” (2 Kings 3:11).

When Jesus washed the feet of his disciples, he not only violated the custom that delegated this task to the lowest household servant but also epitomized humility, as he served those who were supposed to serve him. His actions were even more poignant in light of the argument that the disciples were having over who was the greatest (Luke 22:24-27).

A Similar Scene in Gamaliel’s Life

Interestingly, a similar story is recorded about Gamaliel a few decades later. Gamaliel was the head of the Sanhedrin, the highest office in Israel. At a banquet, he got up and served food and drink to others of lower stature. Some were shocked and rejected his service, just as Peter rejected Jesus’ offer to wash his feet. Honoring a rabbinic scholar is was like honoring the Torah! Surely it shouldn’t be neglected.

A debate ensued about whether the great sage could set aside his own honor to serve others. After considering biblical precedent, the other rabbis declared that he could:

Is Gamaliel a lowly servant? He serves like a household servant, but there is one greater than him who serves.

Consider Abraham, who, even though he was the greatest of his generation, ran to serve what looked like three lowly wanderers (Gen. 18:8).

There is one even greater than Abraham who serves. Consider the Holy One, blessed be He, who brings forth rain and causes the earth to bloom and arranges a table before each and every person. (Psalm 78:19)1

It is interesting that Gamaliel is on record as acting very similarly to Jesus by humbly serving others. He is the same figure who educated Paul and defended the early church in Acts 5:34-40. Could he have been influenced by Jesus’ teaching? Considering that he was familiar with the famous rabbi and his unique movement, it doesn’t seem unlikely.

Paul, a disciple of Gamaliel, beautifully brought all these ideas about the humility of God in the person of Christ himself in his letter to the Philippians:

Your attitude should be the same as that of Christ Jesus: Who, being in very nature God, did not consider equality with God something to be grasped, but made himself nothing, taking the very nature of a servant, being made in human likeness. And being found in appearance as a man, he humbled himself and became obedient to death—even death on a cross!

Therefore God exalted him to the highest place and gave him the name that is above every name, that at the name of Jesus every knee should bow, in heaven and on earth and under the earth, and every tongue confess that Jesus Christ is Lord, to the glory of God the Father. (Phillipians 2:5-11)

1This is Gamaliel the Elder, or Rabban Gamaliel (I) (died approx. AD 52). Based on the commentary on Exodus 18:12 in Mekhilta de Rabbi Ishmael, an early rabbinic text.