So Moses and Aaron went to Pharaoh and did just as the LORD commanded. Aaron threw his staff down in front of Pharaoh and his officials, and it became a snake. Pharaoh then summoned wise men and sorcerers, and the Egyptian magicians also did the same things by their secret arts: Each one threw down his staff and it became a snake. But Aaron’s staff swallowed up their staffs. Yet Pharaoh’s heart became hard and he would not listen to them, just as the LORD had said. – Exodus 7:10-13

It is fascinating that the first sign that God gave Moses to show Pharaoh God’s power is so weak as to be almost humorous. Pharaoh had imagined that the God of Israel was one of the small gods of other nations, and assumed his powerful gods could easily defeat him. This first story sounds like that is the impression that God wants him to start off with, too, initially. 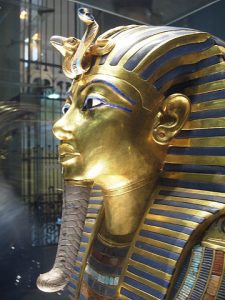 God told Aaron to throw down his staff so that it changed into a snake, fully knowing that the Pharaoh’s magicians could do the same thing. They must have smirked when they saw it, recognizing it from their bag of standard warm-up stunts and laughing to themselves at how easy it would be to replicate. It’s like God was lobbing a slow pitch over the plate for an easy swing – something to draw the attention of the spiritual powers that there was a new “god” in town who
had wandered into their territory.

Interestingly, the word to describe the snake is different that what one would expect. The typical word for snake was nahash (nah-HAHSH), but this was a tanin, (tah-NEEN) a larger reptile, possibly describing the hooded cobra of the Nile. The cobra is the snake-god associated with Pharaoh’s powers as king, the one seen in the golden headdress and masks of Pharaohs in Egypt. The magicians were able to produce it too, either by sleight of hand or by some occult powers.

It is interesting that when God interacts with humans, even his enemies, he starts out in such a humble way, like a baby laid in a manger. He begins by looking a lot like what was around, like one teacher among many, one Galilean carpenter in the crowd. Only later will his full power be displayed.