This summer we visited the temple of Arad in southern Israel, which was built exactly according to the specifications of Solomon’s temple except on a smaller scale. The one feature that is full-sized is the sacrificial altar, which is made out of stones not cut by human hands, as is commanded in Deuteronomy 27:6. The stones still have a slight red tint where blood was poured on them. It is fascinating to think that this temple may have been used in worshipping the God of Israel. 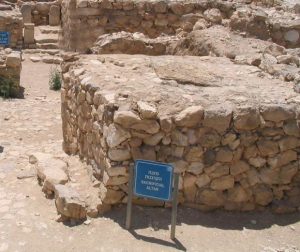 One question that we as modern Christians have is why ancient peoples used sacrifice in worship. It has been a traditional practice for millennia, so when God gave Israel regulations about it, he was not introducing a new idea to them. In fact, animals were not eaten unless the blood was offered to a god by pouring on an altar or on the ground, so in essence, any time meat was eaten, a sacrifice was made (Deut. 12:15).

Sacrificing an animal from one’s flock was a concrete way to show loyalty or love to God. In ancient times when food was less abundant than it is now, people had a continual concern about having enough food to feed their families. To give an entire animal to God was an expensive gift, reducing what the people had for their own basic needs. It was also an acknowledgement that God was the source of the animal in the first place.

We tend to assume that sacrifices were all for atonement for personal sin, but that is not really true. Often they atoned for ceremonial impurity that comes from necessary events in life, like having a baby, or touching a dead body, etc. This type of “uncleanliness” was not equated with sin, but yet it had to be removed to enter the presence of a holy God. The point of all worship was to come near to God. By feeling close to God, the worshipper knew they could bring their needs to an attentive God.

One of the ways that an ancient person came near to the presence of God was through a fellowship offering, in which the family ate some meat of the animal after it was sacrificed, as if God had invited them to eat at his table and was sharing his dinner with them. An essential aspect of the worship was the eating of the food, not just the death of the animal. The Passover sacrifice was of this type, and the Lord’s supper, by being based on the Passover meal, is of this type too. The next time we take communion, we can think back to the long history of coming into God’s presence through sacrifice, and through Christ’s sacrifice, we can too.