And he came to Nazareth, where he had been brought up; and as was his custom, he entered the synagogue on the Sabbath, and stood up to read. – Luke 4:16

When we visited Israel we saw many churches, but we were more interested in the synagogues that remained from Jesus’ time, where he may have even taught. We might think that the tradition of “church” would have come from the laws in Leviticus about the tabernacle or Temple. Instead, the church is a continuation of the weekly synagogue meetings that were in practice in Jesus’ day. In fact, Paul’s custom was to attend synagogue on the Sabbath (Acts 17:2) and James speaks to the early believers about their synagogue meetings in James 2:2. 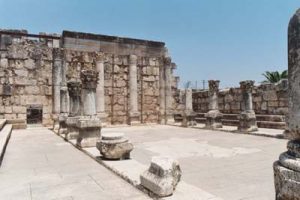 The tradition of the synagogue began more than 500 years before Christ, during the Babylonian exile, when faithful Jews needed a way to worship God in the absence of a temple. When they returned to the land they persisted, because most lived too far from Jerusalem to go to the Temple more than a few times a year. Through the synagogues, average laborers could study the Bible together every Sabbath. Children learned the scriptures through the local school that was also held there.

Common folk who dedicated themselves to study were encouraged by that culture to become itinerant teachers called rabbis, who traveled from synagogue to synagogue to teach. Through this practice, faithful Jews were hiding God’s word in their heart, and the scene was being set for Jesus’ ministry on earth. This is was the reason for the high level of scripture knowledge in Jesus’ time, and his ability to teach large crowds of interested, educated listeners.

We can be very thankful for this innovation of the local synagogue. Much of the religion of the Middle East, including bibical Judaism, focused on sacrificial offerings with priests at a central temple or tabernacle. Even in Acts, the early Christians worshipped at the Temple for feasts and took part in sacrifices (Acts 21:26). These practices were entirely dependent on having a temple, and ended when it was destroyed in 70 AD.

But through the synagogues, and later churches, average people could grow in faith and knowledge of God’s word wherever they lived. When Paul went to the diaspora, he brought the gospel first to the synagoges there. And when the church moved outward, it brought people a way to worship God wherever they lived, to the ends of the earth.