I tell you that in the same way, there will be more joy in heaven over one sinner who repents than over ninety-nine righteous persons who need no repentance. Luke 15:7

The Hebrew word that we commonly translate as repentance is teshuvah (teh-SHOO-vah). But knowing more about the word and the concept behind it can give us insight on the act of repentance. First, teshuvah literally means “to return,” as when a person does an about-face and walks in the opposite direction from where they were headed before, like when the prodigal son comes home. It also embodies the picture of a person rediscovering what had been left behind before—a new, whole relationship that replaces a broken one. 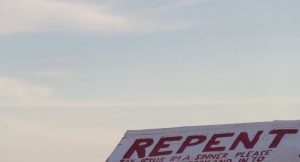 Interestingly, teshuvah doesn’t really refer to having inward remorse for sin, which is the initial response to a realization of wrongdoing. Rather, it points toward the later, outward result of repentance—that a person actually makes a decision to change and do things differently.

This is an important lesson for us to learn—that to regret something and still keep choosing to do it isn’t really repentance at all. God is ready to forgive us as soon as we call out to him, but if we want to experience healing, we need to make up our mind to live differently and then make a step in that direction—not just wallow in remorse. He has set us free, and we need to claim the freedom in his Spirit to change from our former selves and live as the new creation that we really are.

Another thing that is emphasized in the concept of teshuvah is the joy and love that is the final result. Once we realize our sin and ask for and claim forgiveness, we can know that we are completely acceptable in God’s sight and our time of mourning is over. The rabbis say that when we repent, God actually takes our rebellion and sin and turns it into a source of joy, because we love God more knowing that he has shown his love in spite of ourselves. As Jesus said, “Therefore I tell you, her sins, which were many, are forgiven, thus she loved much; but the one who is forgiven little loves little” Luke 7:47.

Photo by Joel Muniz on Unsplash