Why do you call Me, `Lord, Lord,’ and do not do what I say? Everyone who comes to Me and hears My words and acts on them, I will show you whom he is like: he is like a man building a house, who dug deep and laid a foundation on the rock; and when a flood occurred, the torrent burst against that house and could not shake it, because it had been well built. “But the one who has heard and has not acted accordingly, is like a man who built a house on the ground without any foundation; and the torrent burst against it and immediately it collapsed, and the ruin of that house was great.
– Luke 6:46 – 49

In a week, Jewish people will be celebrating Sukkot, when they build booths to remember how they lived in tents for 40 years when God led them through the desert to the Promised Land. Jesus would have celebrated this every year of his life, and probably made the walk to Jerusalem often to celebrate at the Temple with millions others. 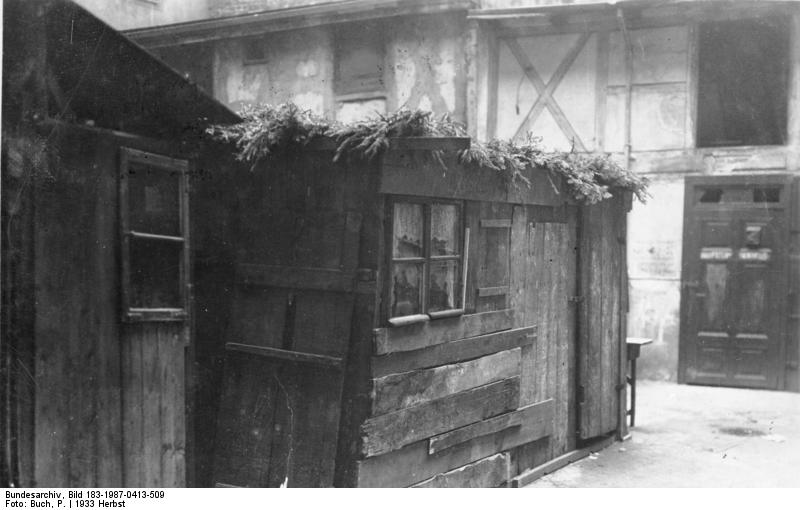 The booths of Sukkot are built according to a tradition that mandates that they are not a permanent structure. They are made of natural materials and open on one side, and branches are laid loosely across the roof, so that you can see at least one star above. Nowadays, it is often a family project to build one, using a few poles or boards and some cloth and branches. Even though people are supposed to sleep in them or at least eat meals in them, it isn’t unheard of that they will blow down before the week is over.

In Jesus’ time, Jerusalem would have been filled with booths, as travelers would have used them as temporary housing in the city. Rabbis often taught using physical examples around themselves, and I wonder whether Jesus was standing next to a sukkah, giving it a strong shake, when he said the words of today’s passage. Even if it was a particularly well-built one, because it didn’t have a foundation, it would have rattled and swayed violently with a tug from his strong carpenter’s arm.

While it is good to learn the lesson from the Sukkah that our lives are fragile and God is our true protection, Jesus teaches that we should learn another one – that we need to move out of the fragile house of a life without foundations to one built on rock, and the only way to do that is to build our lives according to the master builder’s plan.