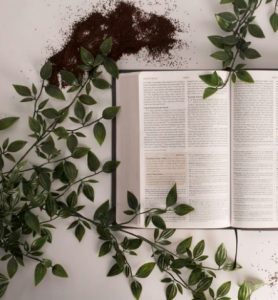 Like many prophets, Joel tells the nation how angry God is with their sins, and then warns of a time of judgment that is coming if they don’t repent. But then, surprisingly, he says:

“Yet even now,” declares the LORD, “Return to me with all your heart, and with fasting, weeping and mourning; and rend your heart and not your garments.” Now return to the LORD your God, for he is gracious and compassionate, slow to anger, abounding in lovingkindness and relenting of evil. (Joel 2:12-13)

This description of God, that he is “gracious and compassionate, slow to anger, abounding in lovingkindness…” is quoted nine times in the Old Testament. The first place that this is heard is on Mt. Sinai, when the Lord passes by and shows all his glory to Moses, and utters these profound words about himself:

Because they are God’s own revelation about himself, they are some of the most important words in all of the Bible about the nature of God. It begins with God saying his divine name, so holy that for thousands of years Jews including Jesus did not utter it out loud, even to this day. Then it describes his great mercy, patience and willingness to forgive even the worst sin.

This description of God comes up several times in the psalms (Ps. 86, 103, & 145 and others) and was probably part of many worship liturgies during Bible times. It is traditionally called by Jews the “Thirteen Attributes of God,” counting thirteen ways God’s mercy is described, though some are not obvious as we read it. The Jewish people still recite this every morning as part of their congregational prayers, and every time they read from the Torah. On Yom Kippur, the day of Atonement, and on other fast days, many prayers focus on this verse.

In the Exodus passage, God says another thing about himself that is usually not included with the first verse when it it is quoted later in the Bible:

…Yet he does not leave the guilty unpunished; he punishes the children and their children for the sin of the fathers to the third and fourth generation” (Ex. 34:7)

The reason for not including this, according to rabbinic scholars, is because of the words of Ezekiel 18, which say that children who are innocent are not punished for the sins of their fathers. They interpret the verse about God’s punishment of children as only applicable as long as the children do not repent, but carry on in their father’s sin.

While God does not let the unrepentant go unpunished, he is ultimately forgiving. Therefore, in Jewish prayers, they focus on the first verse about his mercy. 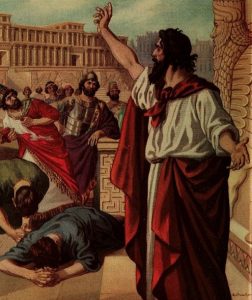 In the book of Jonah, this passage used in anger with God. God sent Jonah to Ninevah to warn them of God’s judgment, and Jonah ran the other way to Tarshish. Why? Jonah knew about the incredible cruelty of the Assyrians in war, who were well-known for the horrific things they did to their prisoners. He knew that of all peoples, they deserved punishment.

It is amazing to hear that Jonah is so furious with God for his forgiveness, he wishes he was dead. What a contrast between the emotions of sinful humanity and the grace of a holy, but compassionate God! While we usually look to the New Testament for stories of God’s mercy, we find one of the most powerful accounts of God’s grace in the Old Testament in the book of Jonah.

His mercy runs through the Bible from Genesis to Revelation. Because Jesus says he does nothing but what he sees his father in Heaven doing, we know that his life and death reflects his Father’s great desire: that we be forgiven and reconciled with him.

The LORD, the LORD, the compassionate and gracious God, slow to anger, abounding in love and faithfulness, maintaining love to thousands, and forgiving wickedness, rebellion and sin. – Exodus 34:6-7

The verse above is God’s own revelation about Himself, when he passed by Moses on Mt. Sinai and showed him his glory. It was God’s answer to Moses’ request: “And now, if I have found favor in your sight, show me your way, that I may know you, that I may continue to find favor in your sight!” (Exodus 32:13). This phrase is called by Jews the “Thirteen Attributes of God,” counting thirteen ways God’s mercy is described. This is a very important text about God, quoted eight other times in the Bible and often used as part of Jewish liturgy.

An interesting thing in Hebrew in this passage is that the words that describe God’s “forgiving wickedness” are literally “to lift or carry guilt,” and in fact, many other places is actually translated as “bear iniquity” or “to bear guilt.” The same phrase noseh avon is used in many passages, including the following:

[The sin offering] is most holy, and He gave it to you to bear the guilt of the congregation, to make atonement for them before the LORD. (Leviticus 10:17)

The goat shall bear their iniquities to a solitary land; and he shall release the goat in the wilderness. (Leviticus 16:22)

Interestingly, the same phrase that is applied to God in terms of forgiving sins is also applied to the atonement sacrifices which bore the sins of the people. There is another word for forgiving sin, selach, that could have been used, but bearing guilt is what God speaks of here. It sounds as if God’s answer to Moses’ request that he “show him his way” is to say that he would bear his people’s guilt!

In the light of this, one more place where noseh avon is used is very significant in relation to the suffering of the Christ — Isaiah’s prophecy of God’s servant who would redeem Israel by paying for their sins:

Yet it was the LORD’s will to crush him and cause him to suffer, and though the LORD makes his life a guilt offering, he will see his offspring and prolong his days, and the will of the LORD will prosper in his hand. After the suffering of his soul, he will see the light of life and be satisfied; by his knowledge my righteous servant will justify many, and he will bear their iniquities. (Isaiah 53:10-11)

It appears that when Moses asked the Lord to reveal his glory and to show him his plan, that the Lord answered by hinting even then of his future plans. Already he had determined that he himself would bear our wickedness, transgression and sin.