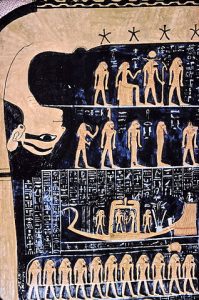 The very first instruction that God gave the Israelites as they were leaving Egypt was to establish a new calendar that was utterly unlike the Egyptian calendar. This may not seem significant to us, but how we measure time is fundamental for how we look at life. Our calendars define the importance of the day to the entire culture, saying whether we should work, rest or worship, or think about some great event in our past.

This was especially critical as the Israelites left the powerful nation of Egypt, which had strongly influenced their thinking while they lived there. Egypt had a twelve-month solar calendar that was entirely organized around the veneration of their gods. Their year started in late June when the brightest star in the sky, Sirius, arose, about the time of the flooding of the Nile. They spent five days in feasting and worship beforehand, pleading with their gods for a good flood of the Nile and good harvest for that year. Each of the 36 ten-day weeks of the year was dedicated to a different god.

In contrast, God instructed Israel to mark time by remembering their redemption from Egypt. Their calendar no longer focused on idolatrous gods, but on permanently remembering the true God that loved them so much that he freed them from slavery. Every aspect of their calendar repeated this motif. The other major feast of the year, the feast of booths (Sukkot), also focused on reliving their time in the wilderness after God brought them out of Egypt. Even the seven-day week was founded on remembering how God had granted them rest from slavery:

You shall remember that you were a slave in the land of Egypt, and the LORD your God brought you out of there by a mighty hand and by an outstretched arm; therefore the LORD your God commanded you to observe the sabbath day. Deut. 5:15

Also, the law to celebrate the fiftieth year as a Year of Jubilee was also founded on the idea that they set free those who are in debt, just as God set them free.

If one of your countrymen becomes poor among you and sells himself to you, do not make him work as a slave. He is to be treated as a hired worker or a temporary resident among you; he is to work for you until the Year of Jubilee. Then he and his children are to be released. Because the Israelites are my servants, whom I brought out of Egypt, they must not be sold as slaves. Lev. 25:39-41

All of their worship and time focused on remembering how God saved them and took them to be their people. In the same way, we as Christians should continually remind ourselves of our redemption in Christ, the Passover Lamb, by his death for our sins. Every day of our lives should revolve around living out of this truth.