The LORD had said to Abram, “Leave your country, your people and your father’s household and go to the land I will show you. – Genesis 12:1

“Israel was sandwiched between the superpowers to the north and south, and very often they were lunch.” That cleverly-phrased statement by Wink Thompson, one of our teacher-guides in Israel this summer, sums up a crucial truth about the land and history of Israel. The land in which God placed his people was, and still is, a land between. 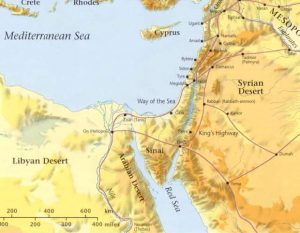 Israel is a land betwen the Mediterranean Sea to the west and the Arabian Desert to the east. Both proved difficult for travel. Early ships were not made to survive the raging sea, and people were not made to bear the intense heat and dryness of the forbidding desert. Israel, then, served as a narrow land bridge between these areas.

But a land bridge for whom? Most of the dominant nations grew up around rivers. Around the Tigris and Euphrates to the north, Assyria, Babylon and Persia became powers. To the south, the Nile River became the source of life for Egyptians. North and south needed each other’s products to survive. So Israel became the land bridge for trade between the main nations of the world.

Kings soon realized that if you control world trade, you could rule the world. And to do that, you had to rule Israel. For most of its history, Israel has been a land under occupation. Today, for one of the few times in history, Israel is actually an independent nation. Yet Israel remains a land between. In the northern Golan region, we traveled right near the Syrian border (watch out for mine fields from the 1967 war!). At Dan we could look into Lebanon. From Masada the hills of Jordan were very clear across the Dead Sea. To the south, Egypt looms large.

So why did God lead Abraham and Moses to this land? Two divine reasons stand out:

God still places us in a land between as we confront our culture and its influences. And he gives us the challenge of complete reliance on him, as we seek to witness to our culture about the true God who rules the world.