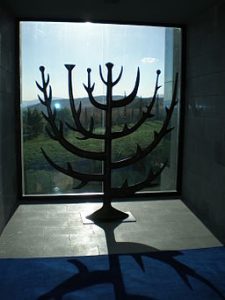 When God spoke to Moses in the burning bush and Moses asked his name, God revealed many things about his nature through what he said. His answer likely was not what Moses expected, because God is so utterly unlike the gods that Moses had encountered. Other gods had names that were nouns, like “Molech” (actually Melech, meaning “King”) or “Baal,” meaning “Master,” or perhaps descriptive names like “Lucifer” meaning, “Light Bearer,” or “Baal Zebul” meaning “Exalted Lord.”

God didn’t use an adjective to describe himself, or a noun to represent himself, the usual ways to make a name. Instead, he used a future-oriented verb phrase that literally reads, “am that am” or “will be that will be.” Then he says that Moses should tell the people, literally, that “will be” has sent him, and proclaims that “will be” is his name forever. (The pronoun “I,” ani or anochi, is not actually present, but the verb is the conjugation for the first person, so the “I” is inferred.)

Why in the world would God use this name to describe himself? A number of observations can be made. One is that the very form of the name shows how very much unlike God is from any other god humans have ever known. Other gods liken themselves to human kings or lords, but this God does not – he is incomprehensible and indescribable. Just as his sanctuary was devoid of images or idols, his name also does not offer a likeness for us to describe him.

The verb that he uses, “to be,” has several significant aspects. It doesn’t just describe something existent, but can be more active, as if to say “I cause,” meaning, “I am your cause” or “I cause you to exist.” It is also likely a reminder of the reassurance that God gave Moses when he was going to Pharaoh – “I will be with you.” God is the God who will be with his people. This is ultimately God’s goal – to dwell among his people forever.

One other way of reading his name seems to be especially significant. It could be read as “I will be known by what I do,” and this is really what seems to be most fitting for how God reveals himself to us. He didn’t just describe himself to Moses, or appear in a big cloud to impress his people. Instead he redeemed his people from slavery, fed them daily, protected them from enemies, and brought them to the promised land. One day he will most fully reveal himself when he redeems the world through the death and resurrection of Christ on the cross.