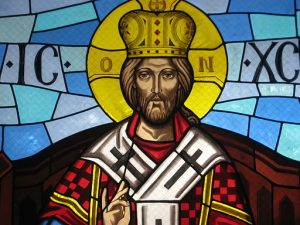 An overarching theme in both the Old and New Testaments is the idea of God becoming king over all the world. In Zechariah we read:

The LORD will be king over the whole earth. On that day there will be one LORD, and his name the only name. (Zech. 14:9)

In Revelation, we find a similar vision of God becoming king over creation:

Then the seventh angel sounded; and there were loud voices in heaven, saying,”The kingdom of the world has become the kingdom of our Lord and of His Christ; and He will reign forever and ever.” (Rev 11:15)

It seems odd to us that the creator of all the universe would not be considered its king at all times. The biblical picture, however, is that even though God is creator over all of his creation, once humanity fell, they excluded themselves from God’s kingdom because of their disobedience.

After the fall, the world was in bondage to sin, and was given over to worshiping other gods. While God is the sovereign judge over all creation, the Bible says that only those who accept him as their king are actually a part of his kingdom.

One of the main themes of the Bible is that after the fall, God’s plan is to repair the breech and bring humans back into his kingdom. Only a couple stories after the flood, the time of man’s worst rebellion, we begin to hear about how God finds one man who will be faithful to him, Abraham. God tells him that he would make him into a great nation.

Later, God makes a covenant with Abraham’s descendants, the Israelites, that he would be their God and they would be his people. God’s kingdom started with one man and expanded to the nation of Israel. The goal was that the whole world would see the true God through this nation who worshiped him as King. He would give them a land that was in the middle of the international trade routes, so that their culture would impact the world as they lived according to his instruction.

In addition, God promised that one of king David’s descendants would be king, and have a kingdom without end. The plan was that this righteous king, the Messiah, would come to establish God’s kingdom over the whole world. The Bible’s vision is that finally, at the end of all things, the LORD will be king over the whole world once again, through the messianic king that God promised to send.

Jesus and the Kingdom of God 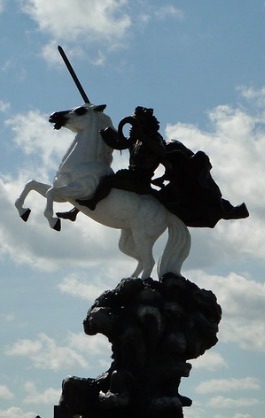 We can imagine there would be much speculation about how God would establish his reign over the whole world. At the time of Jesus’ coming, this was especially important to Israel, who was under oppression by the pagan Romans. Obviously, when the Messianic King came, he would establish God’s reign by conquering the Romans. They read many prophecies about the Messiah that were images of a mighty king who defeated his foes and then took the throne. For instance:

The kings of the earth take their stand and the rulers gather together against the LORD and against his Anointed One (Messiah, in Hebrew). Then he rebukes them in his anger and terrifies them in his wrath, saying, I have installed my King on Zion, my holy hill. You will rule them with an iron scepter; you will dash them to pieces like pottery. (Ps. 2:2, 4-6, 8)

They also read about the “great and dreadful day of the Lord,” where he would come to judge the enemies of Israel, and they longed for that day.

Messianic prophecy also talks about a “suffering servant” and a “Prince of Peace,” but the people of Jesus’ day expected the Messiah would bring God’s judgment. They imagined that there would be one sudden event when he would assert his power and vanquish his enemies, the “wicked” of the nations around them. Then, God’s kingdom would be established because God had destroyed all his enemies. Only the righteous would be left to be God’s Kingdom. They assumed they were the righteous who would survive the judgment, and their enemies would not survive.

When Jesus comes and proclaims himself as Messiah, he spends much of his time talking about the Kingdom of God, because it was the role of the Messiah to establish God’s kingdom on earth. Much of his teaching deals with the fact that God’s way of establishing his Kingdom on earth would be very different than their expectations:

Jesus explained that the kingdom was not going to be established by a sudden, great war to kill all the wicked, but would grow like a mustard seed, as each person repented and enthroned God as their king. It would be a spiritual kingdom that would expand as people heard about the mercy of God, that he would forgive their sins and they could have new life as his people.

It would be good news to the poor in spirit, those who were humble and realized their need to repent, but not to the arrogant who wanted his judgment to fall on the other “sinners.” God would hold off his judgment, allowing the wheat and tares to grow together: he would allow his kingdom to grow in the midst of evil, rather than wiping it out. Only at the end would Jesus return as judge between good and evil, and then his kingdom would be fully established and have its greatest glory.

Jesus explained that God’s way of establishing his kingdom over the whole world was just the opposite of what humans had imagined. The Messiah had come to extend mercy to humanity rather than judgment. God’s kingdom would be established by the atoning death of the Messiah, by which sinners, even the most wicked, could enter by repenting of their sins and being forgiven. In that way, God’s kingdom could expand as the whole world would hear about his amazing grace. Jesus came and brought God’s kingdom to earth, and its expansion is unstoppable, as God’s spirit is poured out, the lost are found, and God’s glory fills the whole earth.

For the earth shall be filled with the knowledge of the glory of the Lord as the waters cover the sea! (Habakkuk 2:14)