When he arrived at the other side in the region of the Gadarenes, two demon-possessed men coming from the tombs met him.… The demons begged Jesus, “If you drive us out, send us into the herd of pigs.” He said to them, “Go!” So they came out and went into the pigs, and the whole herd rushed down the steep bank into the lake and died in the water. – Matthew 8:28, 31-32 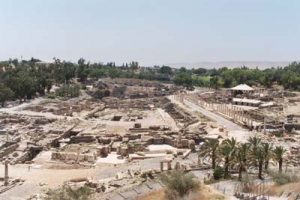 One of the places we visited around the Sea of Galilee was an area known in Jesus’ day as the Decapolis. Today part of Israel, this area on the east side of the Sea was, in the first century, a Roman league of ten cities (Decapolis = ‘ten cities’). Greek, and later Roman, soldiers were given property there as a reward for service.

Perhaps somewhat surprisingly, Jesus makes several visits to what the Jews called “the other side.” On one of his visits, he encounters one (Mark & Luke) or two (Matthew) demon-possessed men. What must have been a terrifying scene for his disciples becomes almost comical in the gospels, as he commands the demons out of the man and into a herd of pigs. The pigs promptly run down an embankment (there are no steep cliffs there) and drown themselves in the Sea. The fact that this is a Gentile territory explains the presence of pigs, which you wouldn’t find in Israel. They may have even been the sacred animals of the Roman temples in this area. That the demons send the pigs into the sea is fitting, since it was considered to be the abode of Satan — they were going home! 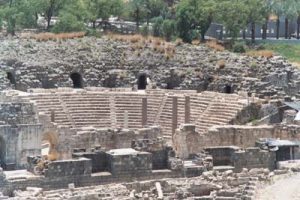 Another event that happens in the Decapolis was the feeding of the 4000, not to be confused with the feeding of the 5000. Mark sets up a deliberate comparison between the two miracles which only makes sense if you know where they took place. When Jesus fed the 5000 (Mark 6), he was in Israel. Afterwards, the disciples picked up 12 baskets of leftovers, a significant number reminding Jews of the 12 tribes of Israel, as if Jesus was saying, “I am the bread of life, sufficient for all Israel.” When he repeats the miracle for 4000 (Mark 8), he is in the Decapolis. Afterwards, the disciples pick up 7 basketfuls. When the Israelites first came into the land, they drove out 7 Gentile nations, many of them in this general area. So Jesus seems to be saying, “I am the bread of life, also sufficient for all the Gentiles.”

Paying attention to where Jesus was in his daily encounters with people can shed brighter light on his message.