Mary then took a pound of very costly perfume of pure nard, and anointed the feet of Jesus and wiped his feet with her hair; and the house was filled with the fragrance of the perfume. (John 12:3)

In Matthew 26 we read the story of Jesus being anointed by Mary with very expensive perfume. Most Christians focus on the story of the anointing as pointing towards Christ’s death at the end of the week, because of Jesus’ comment that she did it to prepare for the day of his burial (Matt 26:12).

Another thing was likely going on, however, that would have been obvious to the disciples, so obvious that Jesus didn’t even need to mention it. While fragrant oils were used on the dead, they were also used to anoint kings. Mary’s extravagant, worshipful action was quite likely intended as her own personal declaration of Jesus as the “Anointed One,” the mashiach in Hebrew, or christos in Greek.

Usually, the ceremony of anointment was reserved only for sacred objects in the Temple and for anointing priests and kings, to show that they had been chosen by God. Instead of being crowned during a coronation, kings were anointed with sacred oil that was perfumed with extremely expensive spices, making it like diamonds in terms of its preciousness. The fragrant, flowing oil was like an invisible crown that conferred an aura of holiness. Everything that had that unique scent would be known to all as God’s special possession.

After their initial anointing, kings would anoint themselves with other precious scented oils for special occasions. We read that both king David and Solomon did this:

(From a psalm for King David) You have loved righteousness and hated wickedness; Therefore God, Your God, has anointed You With the oil of joy above Your fellows. All Your garments are fragrant with myrrh and aloes and cassia. (Ps. 45:7-8)

What is this coming up from the wilderness like columns of smoke, perfumed with myrrh and frankincense, with all scented powders of the merchant? Behold, it is the traveling couch of Solomon; sixty mighty men around it, of the mighty men of Israel. (S. of Sol. 3:6-7)

In ancient times, the majesty of a king would be obvious to those around him, not only because of the jewels and robes that he wore, but by the scent of extremely expensive oils that were poured on him. These royal figures would parade through the streets with the fragrance of the oils, telling all of the bystanders a king was passing by. We see this after the anointing of Solomon, who is placed on a donkey and parades through the streets of Jerusalem, while people stand by and cheer:

So Zadok the priest… went down and had Solomon ride on King David’s mule, and brought him to Gihon. Zadok the priest then took the horn of oil from the tent and anointed Solomon. Then they blew the trumpet, and all the people said, “Long live King Solomon!” All the people went up after him, and the people were playing on flutes and rejoicing with great joy, so that the earth shook at their noise. (1Kings 1:38-40) 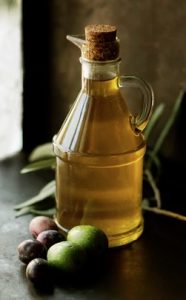 As much as anointing portrayed a person as being set apart by God for a purpose, the ultimate “Anointed One,” that everyone hoped for was the Messiah, the Christ, the King of Kings who God would someday send to reign over the earth.

Mary’s action was not an “official” anointing, but an expression of her own extravagant, worshipful love of Jesus. She knew that he was the one that God had chosen to redeem the world and reign over it as Messiah and Lord.

I wonder if Jesus’ comment about her preparing him for his burial is somewhat ironic, because she intended to glorify him, but he saw her action as pointing toward his suffering and death. Indeed, it was through that death that he was glorified! But I’m not sure that Mary would have thought of it at the time, given that all of Jesus’ disciples failed to grasp the greater plan.

Yet, this scene has profound implications for Jesus’ final week before his death. Jesus owned only one garment that he wore every day, and washing and bathing were not done daily. Because of Mary’s anointing, Jesus likely smelled like royalty during the final week of his life. In a very subtle way, God gave the people who interacted with Jesus a powerful message about him. Every where he went, he smelled like a king!

John 12 relates that the very next day after his anointing, Jesus rode on a donkey on his triumphal entry into Jerusalem, in a scene very reminiscent of the coronation of Solomon. As he rode past, the people who were cheering must have sniffed the air and said, “It was a king that just passed by!”

Imagine the passion week in that light. As Judas entered the garden with the guards to arrest him, the guards must have sniffed the air and wondered what royalty stood before them. As he stood trial, was mocked and stripped naked, this aroma would have quietly clung to him, suggesting who they were beating. Even when the tomb was empty except for his grave clothes, that odor would have wafted in the air when the women entered. What an amazing God we have!

But thanks be to God, who always leads us in triumphal procession in Christ and through us spreads everywhere the fragrance of the knowledge of him. For we are to God the aroma of Christ among those who are being saved and those who are perishing. To the one we are the smell of death; to the other, the fragrance of life. (2 Cor. 2:14-16).