In you, O LORD, I have taken refuge; let me never be put to shame. Rescue me and deliver me in your righteousness; turn your ear to me and save me. Be my rock of refuge, to which I can always go; give the command to save me, for you are my rock and my fortress. – Psalm 71:1-3

Masada stands as a huge outcropping of rock jutting 1,440 feet above the desert floor on the western shore of the Dead Sea. It is located fourteen miles north of the southern end of the sea and eleven miles south of En-gedi. Masada remains today one of the Jewish people’s greatest symbols, and except for Jerusalem, it is the most popular destination of people visiting Israel.

Its history as a desert fortress goes back far into the past. David moved throughout this region of the southern Judean desert as he was hiding from Saul, and quite likely spent time on this mountain. Although Masada is not mentioned by name in the Bible, we see glimpses of it in several places where God is called a “rock of refuge,” or “my fortress.” Metzudah means “refuge” or “fortress” in Hebrew. (In addition to our text above, see also 1 Sam 22:4-5, 23:14, 24:22, and Psalms 18:2, 31, and 144:2.)

The remains that we we see today are from the time of Herod, who not only increased the fortifications, but built magnificent garden palaces on either end of the mountain. It almost never rains here, yet Herod built an elaborate water system to divert water that originated in the Judean mountains into cisterns at Masada. Servants carried water from there to upper reservoirs servicing the palaces, to an Olympic size swimming pool!

The reason Masada is one of the Jewish people’s greatest symbols is for what occurred there during the Jewish revolt against Rome during 66 – 72AD. A group of Zealots took Masada and it became a place of refuge for other Jews fleeing the Roman terrorism. For three years they were able to fend off the Romans and worship the Living God while enduring the rigors of desert life. Finally, faced with certain capture and torture, the group of 960 chose to take their own lives, rather than become slaves of Rome. “The valor of the Jewish zealots residing on Masada during the Roman siege is celebrated as the supreme example of self-sacrifice for the preservation of the nation of Israel. Today, when the recruits of the Israel Armored Corps take their oath of allegiance, they do so on Masada to remind each generation of the price their forefathers paid for their nation. They cry: “Masada shall not fall again!” (1) 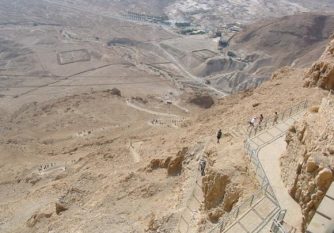 A view of the snake path from the top of Masada

To climb the arduous snake path in the 120° sun, to imagine looking down helplessly from above on your fellow countrymen enslaved to build a siege ramp against you, to stand at the precipice thinking across history about all the many who have served the Lord at the cost of their lives is to wonder if I will have the courage to stand that test for my Lord one day.

Therefore, you kings, be wise; be warned, you rulers of the earth. Serve the LORD with fear and rejoice with trembling. Kiss the Son, lest he be angry and you be destroyed in your way, for his wrath can flare up in a moment. Blessed are all who take refuge in him. – Psalm 2:10-12